American Airlines made an announcement yesterday regarding AAdvantage program changes that would take effect next year and you can read our take of them here. 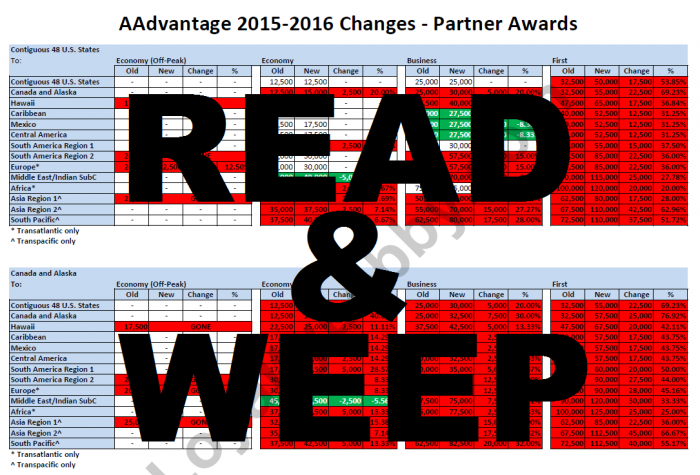 One of the changes is the Oneworld and partner airline award charts that will change on March 22, 2016. I have done side by side comparison between the current and the new charts.

You can access AA’s web page for these changes here.

Here’s the PDF of the changes:

Here are the changes by region:

All other Off Peak awards are gone besides Europe that goes up by 12.5% in number of miles required.

The business class award mileage requirements go up by less than 30% at max, but the changes to first class awards are quite brutal. The number of miles required goes up by up to 69%. The popular first class award to Asia 2 requires 63% more miles come March next year.

All the Off Peak awards are gone from Alaska & Canada and all the awards require more miles besides economy to Middle East / Indian Subcontinent.

The discontinuance of most of the Off Peak awards hit Hawaii hard. You used to need only 20K miles from Hawaii to Europe or South America 2 that is now 40K at the minimum. This is increase of 100%.

Most of the awards from Hawaii are up in economy, business and first class.

All the Off Peak awards that were available from the Caribbean are gone. All Caribbean awards are up besides business class from/to contiguous 48 states.

Off Peak awards are gone from South America Region 2. Economy awards to South America Region 1, Middle East / Indian Subcontinent and Africa require bit less in economy. Business class awards within Region 2 and to Region 1 require less miles. Everything else is pretty much up.

Here it is getting ugly again. All the Off Peak awards are gone except the one to Contiguous 48 states. Economy awards to Central America and South America Region 1 require less miles in economy.

Business and first class awards to everywhere are up by up to 60%!

Some economy awards from this region are modestly down in number of miles required. Most business and first class awards are up by up to 78%.

This region is full of red as well. Economy awards are up by quite a lot. Business and first class awards more.

Off Peak awards are gone! Economy, business and first class awards are up by up to 50%.

First class awards to/from North and Central America are all up my 60% to 67%. Business class awards are up by up to 40%.

Considering that American Airlines announced the changes to the number of miles earned for flight activity yesterday (will take place sometime in the second half of 2016) that hits economy and discounted business class fliers hard (earnings reduced by 50% to 90%) combined with the higher mileage requirements for most flights that people prefer to use their miles for, this is truly a double whammy and huge devaluation of the program.

You also have to keep in mind the draconian award routing rules that American Airlines enforces. Many obvious choices are deemed invalid, as AA requires filed fare for the same city pair. Then AA doesn’t, however, transit in other regions, although this has been relaxed a bit due to Etihad and Qatar.

So, make sue that you have redeemed your miles before March 22, 2016, or they will be worth a lot less the day after.