A hostage crisis is currently unfolding in Bamako, Mali where gunmen have taken 160 guests and staff of the local Radisson Blue Hotel hostage. 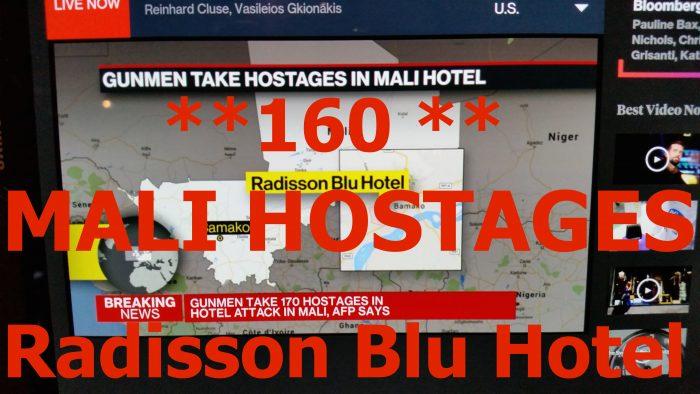 As of right now, Police have surrounded the hotel, which the gunmen entered shooting, and shouting “God is great!” in Arabic.

Given the developments of the last week this obviously makes people think if there is some connection to another IS related attack.

The BBC has a live report about the developments in the case (access here).

Gunmen have launched an attack on the Radisson Blu Hotel in the centre of Mali’s capital, Bamako.

Two people have locked in 140 guests and 30 employees in “a hostage-taking situation”, the hotel’s owners said in a statement.

Police have surrounded the hotel, which the gunmen entered shooting, and shouting “God is great!” in Arabic, a security source told Reuters. A BBC reporter says the US-owned hotel is popular with expats working in Mali.

A Chinese guest told China’s state news agency Xinhua via a mobile app that he was among a number of Chinese guests trapped there.

In August, suspected Islamist gunmen killed 13 people, including five UN workers, during a hostage siege at a hotel in the central Malian town of Sevare.

France, the former colonial power in Mali, intervened in the country in January 2013 when al-Qaeda-linked militants threatened to march on Bamako after taking control of the north of the country.

Mali is a highly unstable country as far as the political and security structure is concerned.

The UN force in Mali took over responsibility for security in the country from French and African troops in July 2013, after the main towns in the north had been recaptured from the Islamist militants.

I can see why expats who work in the region would like a western style hotel every now and then. I can’t many (if any) tourists staying there. Who would visit such a place?

Let’s hope this situation will end positively for all hostages involved. This reign of terror in the recent weeks is really overbearing.

Travelers who plan to visit such risk prone countries should always refer to their Foreign Affairs Office to receive travel and security advise.