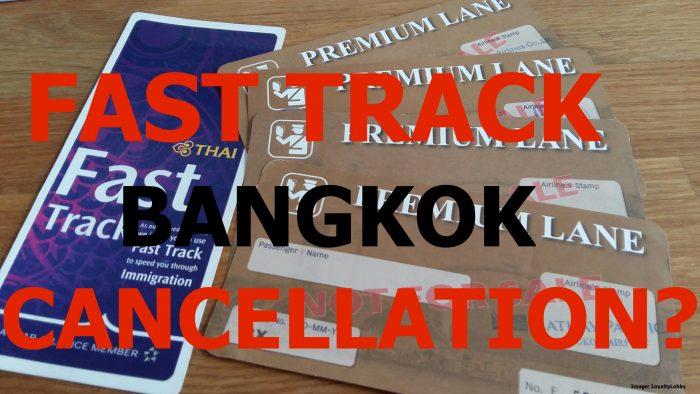 In connection to that it was announced that all sorts of ‘Fast Passes’ will be suspended, even though it was not made clear what exactly qualifies as a ‘Fast Pass’.

Those travelers who fly in and out of Bangkok Airport frequently know that the security and immigration lines can be quite a challenge during peak hours. Passengers in First and Business Class as well as in some instances those with Elite Status receive passes for the Premium Lane Security Check which usually shortens the procedure tremendously.

An advanced passenger background check system will be up and running at six airports from Dec 1 onward to boost security through a thorough screening of all passenger profiles that may lead to longer boarding times.

With the new system, authorities will be able to access information such as whether passengers are blacklisted or banned from entering or leaving any country, said Nitinai Sirismatthakarn, president of AOT.

The APPS system was first accepted in 2003 by Thailand, at the time it hosted the Apec summit. US President George W Bush pressed hard for Thailand to join the growing number of countries in the pre-screening system. Thai officials also announced in 2005, 2007 and 2008 that they were just about to install APPS, and never gave a reason why it failed.

The reason why it failed is pretty easy to identify. Thai authorities are always big in announcing all sorts of measures and the funding for such usually disappears in private pockets short after.

The AoT president said Wednesday, as in previous years, that the six airports due to get APPS protection have been placed on high alert because of terrorist attacks, this time referring to last Friday’s murders in Paris.

He urged passengers to be patient with the extra-tight security measures, including the cancellation of all types of fast passes.

A system like this in Thailand is almost poised to become a problem. If with ‘Fast Passes’ they really mean the discontinuation of the Premium Lanes then it will be a recipe for disaster.

The 35 THB fee for the APPS system will be collected automatically through electronic ticketing, though I wouldn’t put it beyond Thai authorities to collect those fees retroactively in some way.

I can’t imagine the AOT voluntarily foregoing the revenue for the fast passes which the Airlines pay for each passenger using the fast lane. This makes me hope the whole announcement is hot air as usual. What I absolutely don’t believe is that this also effects Thai Airways Premium Passengers who have their own access to a separate Security and Immigration area in Row A of the terminal.