A bomb threat was made against Singapore Airlines Flight SQ1 from San Francisco to Singapore yesterday which lead to additional security measures that kept passengers on the plane in Changi for 2 more hours. 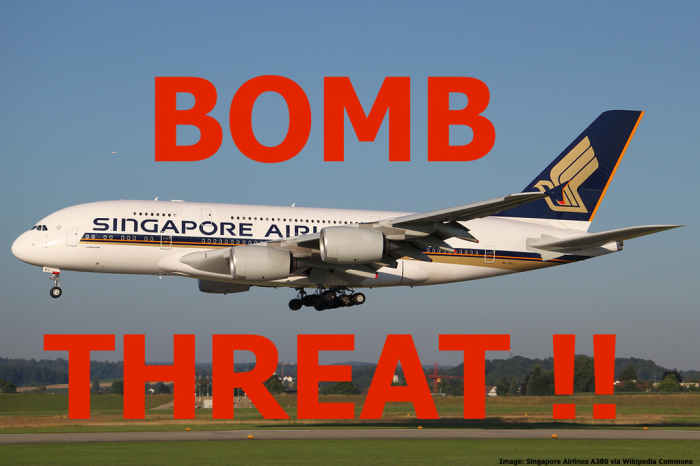 Baggage delivery was also delayed after all baggage was screened again for illicit objects.

Passengers in a Singapore Airlines (SIA) plane had to wait about two hours to disembark at Changi Airport yesterday due to a bomb threat.

Flight SQ001 had arrived in Singapore from San Francisco, via Hong Kong, at its scheduled time around noon yesterday. Several passengers on the aircraft tweeted pictures of police vehicles and security officials surrounding the plane. Baggage was delayed for additional security screening, with the first bags arriving in the claim area more than three hours after the plane had landed.

The airline, in a statement, did not give any information on how the threat came to light.

It said: “Singapore Airlines confirms that there was a bomb threat concerning SQ001, (on) Nov 22, which was referred to the authorities. “We regret that we are unable to provide details as it concerns security.”

The police said in a statement that nothing suspicious was found on the plane or its passengers after security checks were carried out.

“The police take a very stern view against anyone who attempts to cause public alarm or fear by spreading hoaxes or false information.

In my opinion that explanation (or lack thereof) is not good enough. Either you publish some details and provide a proper response to the trapped passengers or don’t be surprised if people start to speculate. This is a typical oppressive Singapore tactic whose government ranks 153 on the World Press Freedom Index (see here) behind Russia and just ahead of Libya and Swaziland.

Needless to say, passengers were not happy about all the delays and inconvenience after such a long flight.

One passenger, J. Ong, posted public Twitter messages to Singapore Airlines describing the delayed processing in disembarking, baggage delivery and mentioned that no SIA staff was available for the effected passengers.

My personal experience is that Singapore Airlines is excellent in flight but on the ground their services are mediocre to terrible, especially when it comes to irregular operations. Their crisis management seems to be awful as well as this relatively minor incident displays. At Changi Airport, most services are being provided by SATS airport ground staff, not SIA’s own personell.

There are plenty of security issues these days that require authorities to take additional measures in order to ensure safety. Doing all this in complete secrecy and inconveniencing the public too much will not fly for long because at one point people will have enough of it.

As far as this case is concerned all passengers arrived home safe and sound, even though they were delayed many hours (and I just assume at least some must have missed their flight connections – hopefully SIA took proper care of them).