150 passengers arriving on American Airlines from Mexico had a very speedy immigration process at New York JFK last Friday. None. They just left the airport without any checks after the flight was handled as a domestic arrival. 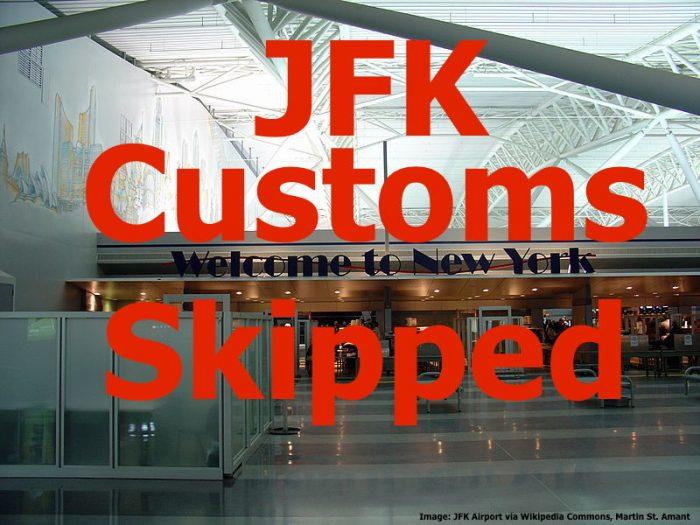 Afterwards passengers got tracked down by aggressive airline and customs officials blaming them for the mishap.

Who hasn’t had the experience of standing in an hour long lineup at some U.S. port of entry waiting to be processed? Certainly not the passengers of American Airlines flight 1671 from Cancun last Friday.

When arriving at New York JFK airport circumstances aligned and the flight was treated as a domestic arrival with the passengers being lead to the domestic, general exit and baggage claim area. The majority of the passengers left without undergoing the process right away.

I found the link to the report of New York Daily News (access here) which will leave many people stunned.

Airline and security officials at Kennedy Airport let 150 passengers arriving from an international flight leave the airport without going through customs, the Daily News has learned.

American Airlines Flight 1671 arrived at JFK from Cancun, Mexico, at 8:50 p.m. Friday. When the plane landed, passengers walked out of the airport without having their passports or bags checked by Customs and Border Protection, sources told The News.

“Some passengers on Flight 1671 did not complete immigration and customs process upon arrival when they were inadvertently directed to the domestic terminal,” American Airlines said in a statement.

Some U.S. Airports do not have designated International Terminals where all gates lead automatically to Customs & Immigration. Instead the terminals are being used for both domestic and international departures/arrivals and the passengers are channeled through a labyrinth of corridors that require the proper doors to be opened or locked respectively.

American Airlines contacted the passengers and directed them to return to JFK for customs processing. An official told The News on Sunday that 144 passengers had returned to the airport and gone through customs. The six that remain are all U.S. citizens, the official said.

American Airlines is working with Customs and Border Protection to ensure they “complete the process and to prevent this from happening in the future,” the company also said in the statement.

You can bet that someone at American Airlines will have to answer for this and it’s likely that there will be a substantial fine for this snafu.

“None of us went through immigration or customs,” a passenger told The News, adding, “There were no signs for customs or anything. The only signs we saw were baggage claim and exit.”

The passenger complained Saturday that agents have “been harassing me with phone calls — they’re coming from high-up people at American Airlines, (Transportation Security Administration) and customs. They’re very aggressive.” Another passenger also said that agents had been reaching out constantly.

I doubt the TSA is calling these passengers. If at all it’s the airline and Customs Officials. While they have a point that people should indeed be retroactively processed (as long as they are foreigners) they should be a bit more tactful about it. If you live close to the airport fine, return and seek out a CBP Office. But I’m sure some people live further away or maybe even in another state.

“They’re telling me that I am here illegally, that I’m trespassing!” the passenger said. “They said, ‘If you don’t come in Monday, we’re sending FBI agents to your house.’ ”Both passengers said they had to come from Connecticut to JFK to clear things up.

A spokesman for the U.S. Customs and Border Protection, part of the Department of Homeland Security, said the agency is “aware of and looking into the incident and is working with our counterparts to resolve it.”

This is a very typical American response. Blame others and inconvenience them for your own mistakes, one could even say ‘stupidity’. Why do these people have to go back to New York? Is there no other facility that can handle the matter? The effected passengers should be compensated for their expenses and loss of time to rectify the situation.

I’m surprised this doesn’t happen more often given the above described infrastructure of U.S. Airports which are among the worst in the civilized world.

One can argue that an informed passenger would probably be confused and by himself contact an airline or customs official to get things taken care of. But given the origin of the flight being Cancun, the majority of the passengers were holidaymakers who probably don’t think much of it.

If I were a U.S. citizen and someone called me like that I’d tell them to take a hike and send the FBI as they threatened to do. I can see the point to a degree for Permanent Residents and certainly for foreigners but this was exclusively the fault of airport officials and airline staff so watch your words when you call people.