FAA made an announcement today that it has downgraded the Thailand’s aviation sector to category 2 from 1. 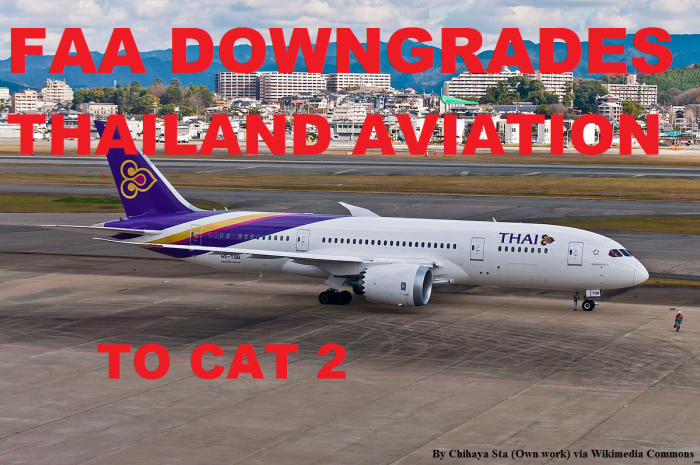 This doesn’t mean that it would be unsafe to fly on Thailand based airlines such as Thai Airways, Bangkok Airways, NOK Air, Thai AirAsia etc. It merely means that the local authority overseeing the sector is simply not up to the task that may lead issues down the road.

Here’s the press release from FAA:

WASHINGTON – The U.S. Department of Transportation’s Federal Aviation Administration (FAA) today announced that the Kingdom of Thailand does not comply with International Civil Aviation Organization (ICAO) safety standards and has been assigned a Category 2 ratingbased on a reassessment of the country’s civil aviation authority.

U.S. and Thai aviation officials have a long-standing cooperative relationship and both our countries work continuously to meet the challenge of ensuring aviation safety. A Category 2 International Aviation Safety Assessment (IASA) rating means that the country either lacks laws or regulations necessary to oversee air carriers in accordance with minimum international standards, or its civil aviation authority – a body equivalent to the FAA for aviation safety matters – is deficient in one or more areas, such as technical expertise, trained personnel, record-keeping, or inspection procedures. With a Category 2 rating, Thailand’s carriers can continue existing service to the United States. They will not be allowed to establish new service to the United States.

As part of the FAA’s IASA program, the agency assesses the civil aviation authorities of all countries with air carriers that have applied to fly to the United States, currently conduct operations to the United States, or participate in code sharing arrangements with U.S. partner airlines, and makes that information available to the public. The assessments determine whether or not foreign civil aviation authorities are meeting ICAO safety standards, not FAA regulations.

A Category 1 rating means the country’s civil aviation authority complies with ICAO standards.  With an IASA Category 1 rating, a country’s air carriers can establish service to the United States and carry the code of U.S. carriers. In order to maintain a Category 1 rating, a country must adhere to the safety standards of ICAO, the United Nations’ technical agency for aviation that establishes international standards and recommended practices for aircraft operations and maintenance. IASA information is posted at www.faa.gov/about/initiatives/iasa/.

Thailand based airlines may find difficulty opening new routes and some countries may limit flights operated by airlines based on the country.