An elderly mainland Chinese woman has been fined 2000 HKD by a Hong Kong Magistrates court for removing (stealing) a life jacked from a Cathay Pacific flight. 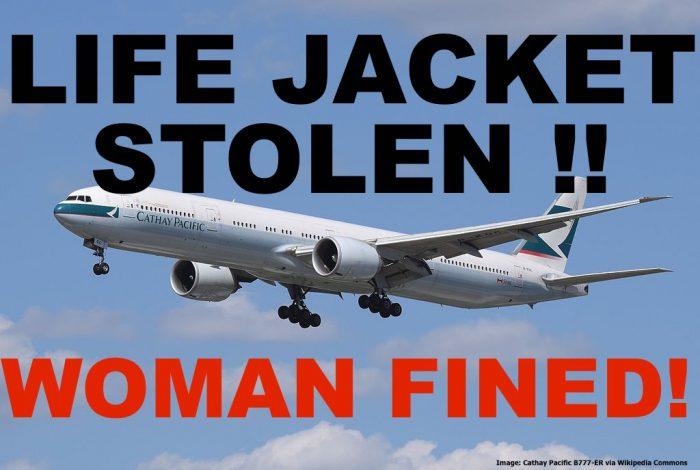 The 64 year old woman declared in court she believed it to be a souvenir that was free to take.

While this claim is obviously outrageous I wouldn’t doubt that this was actually her mindset. Many of these elderly Chinese travelers from the provinces have never flown before in their life.

I came across the story while reading the Shanghaiist (access here).

An elderly Chinese woman has been fined HK$2,000 after being found guilty of stealing a life jacket from a Cathay Pacific aircraft. According to the woman herself, however, she simply assumed that there was one kindly provided for every passenger to take home as a souvenir.

The 64-year-old from Shaanxi province was journeying to Xi’an from Taipei via Hong Kong. It was in Hong Kong as she passed through security that officials were surprised to find a Cathay Pacific life vest worth HK$360 stuffed in her luggage, reports Apple Daily. The matter was quickly reported to the police and she was promptly arrested.

Appearing in front of the Tsuen Wan Magistrates’ Court on Tuesday, the woman pleaded guilty and reiterated that she was genuinely unaware that it was prohibited to take the life jacket, as she believed it to be a souvenir and planned to take it back to Xi’an.

Interesting that this was discovered at the transit security at HKIA. Probably a rare instance where they really uncover something illegal.

This court hearing must have been comical.

During proceedings the woman even fainted in court. She later said that her blood sugar was low and expressed her simple wish to return to Xi’an, even without the jacket. …

When the magistrate threatened her with a week of jail time instead, she coughed up the fine with the help of her husband and was released the same afternoon, Oriental Daily reported.

2000 Hong Kong Dollar are still a very cheap fine (appr 260 USD) but for sure the age and circumstances of the woman were taken into account. I wouldn’t expect a more youthful offender to receive the same light sentence.

Life jackets are expensive and most importantly they are a security item. I’m not sure how often the aircraft are being checked for the actual completeness of these items but if there was ever an emergency when such a life jacket would make a difference someone might pay the ultimate price for such a foolish act of a previous passenger/thief.

So for obvious reasons, leave all these safety related items where they are. This also includes the Safety Card.

Airfare of the Day [Premium Economy] CATHAY PACIFIC Singapore to New York from $1,006