Eligible travelers in the U.S. who are enjoying the benefits of the PreCheck program have been wondering about the ever increasing lines due to a ‘managed inclusion’ of non-enrolled travelers on an ad hoc basis. 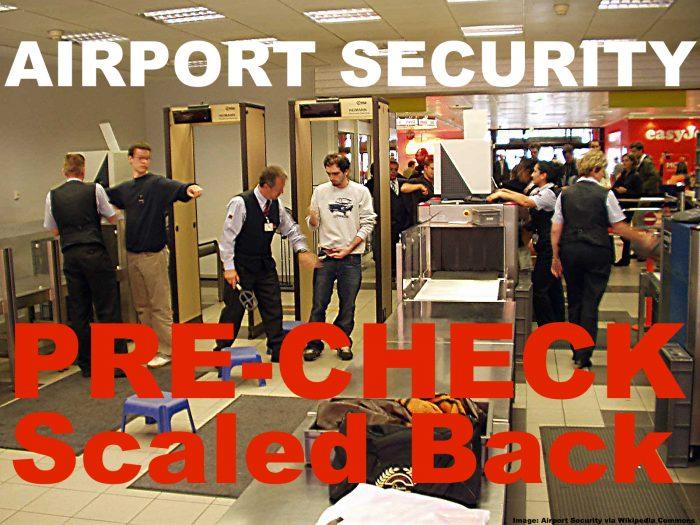 This is about to change as the TSA stopped, or at least drastically scaled back the inclusion of non enrolled fliers based on behavior detection and other parameters to use Pre-Check.

For sure most frequent travelers in the U.S. have heard about it. For those who didn’t, the TSA PreCheck Program (access details here) allows ‘Trusted Travelers’ who provided some information to the TSA to expedite their screening process at U.S. airports through a special lane. During this process the passengers shoes and belts can remain on and laptops as well as liquids do not have to be removed from the carry-on while being screened.

This system worked great because everyone participating knew what they did (or didn’t) have to do. After all that’s why they signed up for the program in the first place.

About two years ago the TSA began to selectively admit people who they deemed ‘trustworthy’ based on behavior analysis and certain other criteria to these PreCheck Lines. The problem: They had not the slightest idea what they are supposed to do in these special lines and usually went through the regular drill of removing everything which slowed the process down dramatically. In other words: The whole benefit of PreCheck is gone when your Lines grow the same size as the regular lineups due to uninformed passengers. And you can’t even blame these people since they never get a proper introduction. They are being told ‘Get over there in the left line Ma’am. No need to remove your shoes!’ (if at all).

There were two stories I found on this matter. Respectively on was sparked by a readers email in the LA Times (access here). The reader complained about the ever growing lines of the PreCheck program. The article responded:

We have good news and bad news, depending on who you are. TSA’s “managed inclusion” came to an end in mid-September. That’s the program that allowed people who hadn’t paid for the privilege to get the same benefits as paying customers.

Before the program began to catch on, PreCheck lines often were empty, which seemed an inefficient use of TSA personnel. Enter managed inclusion, in which fliers who hadn’t paid their money got to enjoy life in the fast lane.

People who suddenly had the benefit were puzzled about why, but worse, they often didn’t know what they were supposed to do. Many went through the drill — shoes and jacket off, for instance — even though they didn’t have to.

Our unhappiness about line crashers may have contributed slightly to the decision to end managed inclusion, but it was probably other issues with TSA, including an internal Homeland Security report, which ABC News got its hands on, that showed lapses in airport security. … “TSA has recently eliminated the practice of utilizing behavior detection officers and explosive trace detection sampling to direct certain passengers into TSA PreCheck expedited screening lanes.”

I think the TSA meant this as a well intended experiment but it simply didn’t work out. I don’t want to comment on the efficiency of airport security, I think there has been ample material to suggest that it’s merely theater to lull the masses into a false sense of security.

An investigation of the TSA themselves found that 95% of illicit objects were not detected while going through checkpoints (LoyaltyLobby wrote about this here).

Non-enrolled fliers, who’ve been pre-screened, have been allowed to access the expedited lines, frustrating PreCheck members who say those passengers bog down the process and are able to access a perk that others have paid for.

The TSA has started to address the issue. On Sept. 13, the agency officially stopped using behavior detection officers and some other layers of security to screen non-enrolled fliers for entry to the PreCheck lanes.

“Overall, the agency is now moving toward offering TSA PreCheck expedited screening only to trusted and pre-vetted travelers enrolled in the TSA PreCheck program and is working with a number of partners to expand enrollment in (the) program,’’  TSA spokesman Bruce Anderson said.

I see pictures popping up in my personal Facebook feed of friends posting from their daily ordeals at security checkpoints. Airports such as Atlanta and Chicago had some of the worst lineups, even for PreCheck. I asked a few of them and they said it has gotten better by now.

Airport security is a necessary evil of traveling these days. While it may not uncover professionally disguised items I’m sure it prevents people from taking certain things into the cabin that could spark trouble, especially if the individual is already an edgy personality (one could say, a troublemaker). Remember all the cases recently where passengers were biting each other or one guy who urinated on his seatmate? I’m glad these people don’t have any sharp knifes etc with them.

I have PreCheck as part of Global Entry and it works quite well. But then again I reduced travel to and within the U.S. to an absolute minimum as I simply don’t enjoy it as much anymore as I used to. Hope all you PreCheck folks have a better experience at the checkpoints in the near future!