The first commercial flight to ever touch down in Antarctica has commenced this week and was operated by the airline Loftleidir Icelandic (Icelandic Airlines). 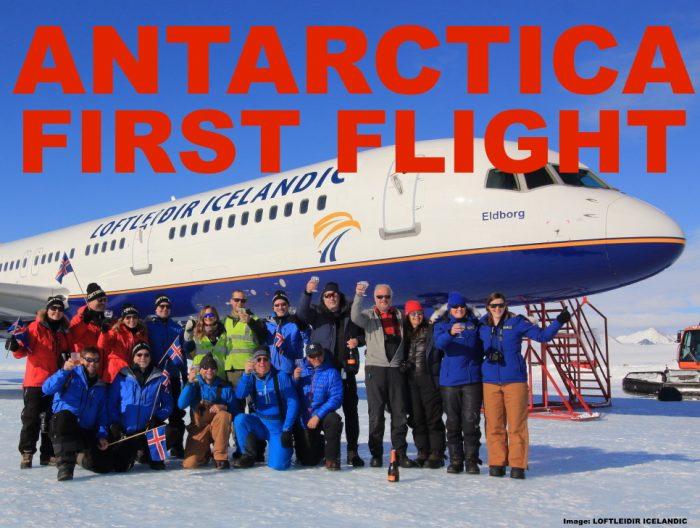 The flight was operated with a Boeing 757 and landed at Union Glacier, Antarctica, last Thursday.

This is for sure one exotic location to take a trip. It’s not uncommon for tourists to visit Antarctica by ship while taking a cruise but flights were so far restricted to transport planes that supplied the various posts in this remote area of the world. The trip was organized by Antarctic Logistics & Expeditions ALE (access their website here).

For the first time ever a commercial Boeing 757 passenger plane has landed in Antarctica at Union Glacer.

The Loftleidir Icelandic airliner touched down on the blue-ice runway as part of a mission to “to prove the feasibility of landing commercial passenger airliners at Union Glacier,” said a statement from Antarctic Logistics & Expeditions (ALE).

The article has a nice set of pictures provided by ALE as well.

Iceland Magazine (see here) has a full scale report on it with more detailed information that isn’t all promotional release.

Yesterday the Icelandic Airline Loftleiðir Iceland made history when it landed a Boeing 757 on the Antarctic ice sheet, the local news site Vísir reports. This is the first time a Boeing commercial passenger jet lands in Antarctica. Previously the Royal New Zealand Air Force had landed a 757 in Antartica. Historically the transport planes have been Hercules L-282G and Ilyushin IL76-TD.

The entire crew of the plane was Icelandic, and this was also the first time an Icelandic airplane lands in Antarctica. Sixty passengers were on board the plane.

It would be great if in the future such trips would be more common and affordable. With sixty passengers it’s a pretty small number of participants considering the usual capacity of a 757 aircraft.

I love exotic destinations that are not only special in panorama but also extremely difficult to reach. If you visit such locations it’s for sure one of the most memorable moments.

If you’re interested in doing such an excursion maybe the company who organizes this (ALE) has some option for you or alternative Google can provide further information about tours and charters.