United States is tightening the Visa Waiver program that allows passport holders from 38 countries enter for 90 days at a time without visa. 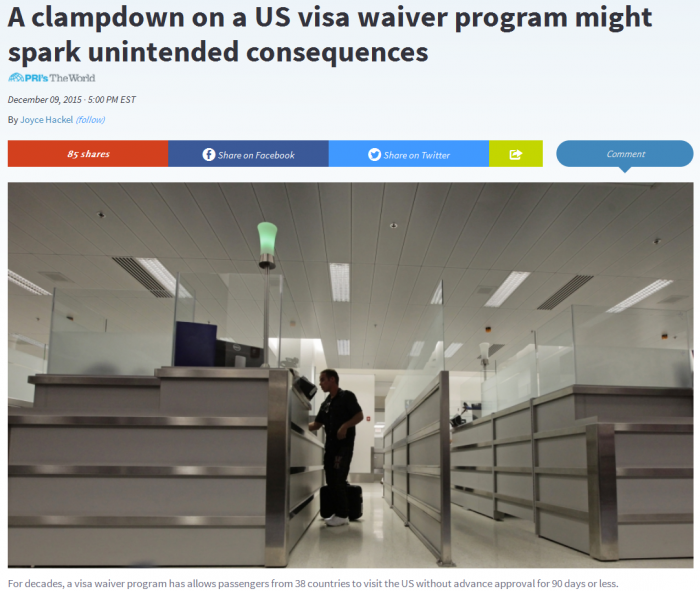 In the light of the recent terrorist attacks, the US house voted yesterday that those that have visited Syria, Iraq, Iran or Sudan in the past 5 years are not eligible to enter the US under this program.

The US House of Representatives voted Tuesday to amend the visa waiver program to require more paperwork from travellers from those countries who recently visited Syria, Iraq, Iran or Sudan.

“If they visited in the last five years, then they would have to go through the normal visa screening process, instead of the visa waiver process,” explains Marc Rosenblum, deputy director of the Migration Policy Institute’s US Immigration Policy Program.

A key problem, the ACLU and other groups say, is that the bill, whose lead sponsor is Rep. Candice Miller (R-Mich.) is written so broadly that people who may have no ties or very thin connections to countries such as Iraq, Iran, Sudan and Syria will be excluded from the visa waiver program.

For instance, according to the ACLU’s reading of the bill, a person who was born and raised in France but whose father is a Syrian citizen would be forced to get a visa before visiting the United States, even if that person has a French passport and has never been in Syria.

If someone is entering the United States under the visa waiver program and has nefarious plans, who believes that he/she will disclose to have visited the four countries in the past five years?

Doubt that US would get passport scan data from these countries and those with bad plans are likely just walk over the border to/from these countries without traces. Obviously politicians have to show that they are doing something about the terrorism issue, although I doubt that this would have any effect.

I visited Iran this fall, was in Damascus back in 2008, and was planning to go to Erbil sometime in 2016. There used to be some very good around the world fares out from Sudan…..