Another ‘gem’ reaches us from China today where a firefighting crew responded to an engine fire but mistakenly unloaded their foamy goddess onto the wrong aircraft.

After the crew noticed their mistake and turned to the correct aircraft it was already too late. The innocently hosed down plane underwent a long safety check due to this unwanted procedure and was 10 hours delayed.

The incident furthermore caused the delay of an additional thirty flights at Fuzhou airport due to the foam on the tarmac and re-arranging of traffic.

USA Today had a piece on it today (Access it here) and it also contains some pictures.

Firefighters at a Chinese airport responded within minutes when the crew of taxiing Boeing 737-800 reported sparks coming from an engine. The firefighters then sprayed foam on the wrong 737-800, dousing a different airline’s plane at the airport serving the southeastern Chinese city of Fuzhou.

Eight fire trucks arrived to the scene just four minutes after the initial report. The Associated Press says they “quickly turned their attention to the correct plane, but the other one — with passengers aboard — was delayed 10 hours and the entire incident delayed 30 flights, the airport said in a statement.” No one was injured, according to media reports.

Can you imagine the reaction as either crew or passenger on that innocent, by-standing aircraft when all of a sudden these fire trucks unload upon you? 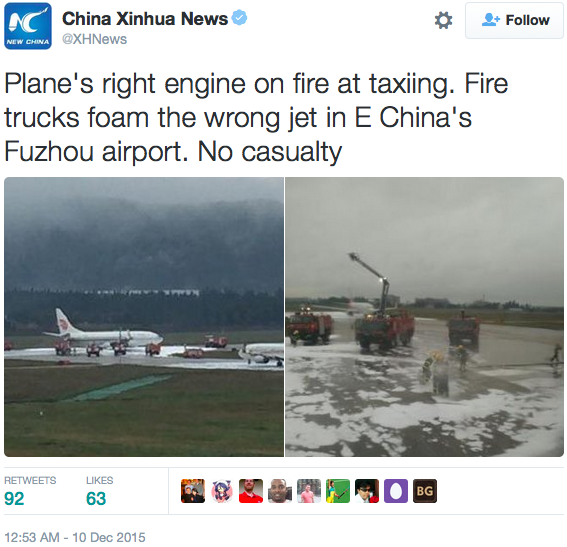 Xinhua News had a bit of a ticker on Twitter while the situation was unfolding (access here) as seen above.

It all started when the crew of a Beijing-bound Air China 737-800 reported problems with one of the plane’s engines. When firefighters arrived, the Air China aircraft’s engines were switched off. But exhaust fumes were visible from a nearby Fuzhou Airlines 737-800, so the firefighters mistakenly sprayed foam on that plane instead. The airport’s control alerted firefighters of the mistake.

Fuzhou Airlines tells AP its aircraft ended up covered in fire-retardant white foam and had to undergo a safety check after the incident. It finally took off about 10 hours later.

A 10 hours delay at Fuzhou Airport is bad, I feel for these passengers!

These firefighter must have lit one up during their shift otherwise they wouldn’t be so trigger happy with their foam canons and just unload on anything that has the slightest resemblence of smoke (in this case: exhaust fumes).

The entire ‘exercise’ certainly cost plenty of money, I can only imagine that Fuzhou Airlines is going to recover their costs from the airport authority.