Fellow passengers on their Air Asia flight were not happy when a Chinese woman started to remove her footwear and placed her bare feet on the armrest in front of her.

The passengers on the flight from Bangkok to Xi’an complained about the smelly and disgusting act to the flight attendant who answered there was nothing she should do as they were ‘all Chinese’.

Bare feet on the aircraft are a personal pet peeve of mine and I couldn’t escape this article in Chinese media that has been picked up by The Shanghaiist this week (access here).

A Chinese passenger was spotted giving approximately zero f**** during an Air Asia flight from Bangkok to Xi’an last week, kicking her bare feet up and resting them on a neighboring passenger’s armrest.

Looking to chill in her humble economy class seat, the woman sat down and proceeded to take her shoes and socks off, to the disgust of fellow passengers, she then went even further, invading the personal space of the person sitting in front of her. A flight attendant was overheard apologizing to disgusted passengers, explaining that there was nothing she could do because, “They are all Chinese,” according to Tencent (see here).

If you are curious how the whole situation looked like, here is the image captured by the passenger in the seat ahead of the woman. 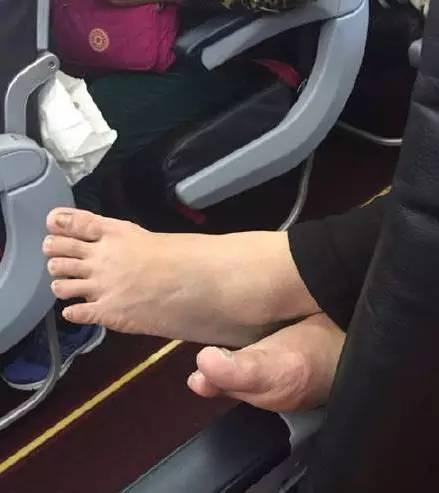 Simply disgusting. It’s beyond me how people can think this is acceptable behavior. John has featured a similar case last week in the Whine Wednesday edition ‘Pigs on Planes’ (access here).

I’m glad other passengers said something but I think the flight attendants have realized that it’s fighting against windmills to try and enforce proper behavior with a good majority of these mainland Chinese.

Passengers should have approached the woman directly and told her to remove her disgusting feet off from that armrest. If it was me in that seat, the second after taking that picture I’d roll the onboard magazine together and give this pair of feet a good slap with it.