In today’s edition of Fabulous Fridays we are revisiting a popular topic: Status Matches and how you can use them to your advantage. 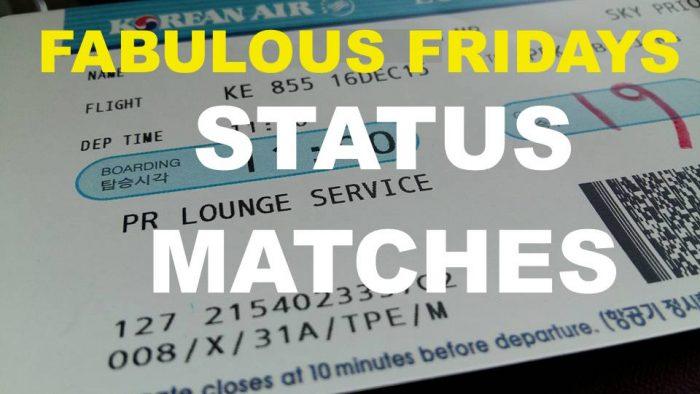 Sometimes these Status Match Promotions are extremely random and you might never think of using the airline or alliance anyway.

The same held true when Alitalia was offering a status match to their FrecciaAlata Plus (SkyTeam Elite Plus) level. LoyaltyLobby wrote several pieces on this topic, see the most recent one here.

I’m usually using Star Alliance and especially oneWorld exclusively which is why the application to this status match was a pure fun matter, I didn’t really have any use for it at that point of time.

However since then I was twice in the position where I actually has to book a flight on a SkyTeam carrier and having Elite Plus Status which grants Lounge Access and Priority Baggage was more or less a life saver.

One was an early morning flight from Beijing to Tokyo-Narita on Delta Airlines. The other just this week a redemption using GOL Smiles on Korean Air in Economy Class from Taipei via Seoul to Beijing. Both these tickets were sort of last minute bookings and paid reservations were off the charts price wise. Neither does it make sense to redeem for Business Class on flights that take 3 hours or less.

I expect to take advantage of the Skyteam Elite Plus a few more times in the coming year due to some projects in South Korea which leaves me more or less at the mercy of Korean Air, even though that’s not the worst thing to experience.

I can only suggest that if such a status match opportunity becomes available to try and go for it. You never really know if you can’t use it at some point in the future.

Status matches are typically a once in an account-lifetime option so for future promotions you would need to open a fresh account.