The Compensation Clinic takes a ride on United Airlines this week where one of our readers managed to receive an appropriate compensation for his troubles. 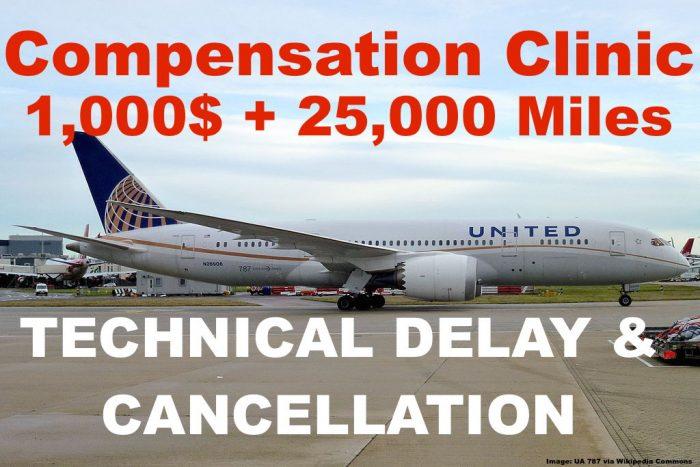 Remember that you can always email me, send me a Facebook message or Tweet me about the issues you have with hotels, airlines and other travel providers. I will feature one new Compensation Clinic case each week.

Our reader Axel from Munich, Germany had a few mishaps on his way to Managua, using United Airlines Business Class. Here is his a part of his letter to United about what happened.

… In the following I will describe what currently makes me extremely furious: The flight UA1421 to Managua was delayed and because of really time critical goods transported by this flight, this was [expletive removed]. But this is not the biggest problem.

On my flight back I had 6 hours connection time in Houston, then the ground staff announced an one hour delay, after that they announced a three hour delay. At the end it was 8:30pm when they canceled the flight. At this time I spent 10 ! hours at Houston Airport. Although the ground staff was really friendly and helpful, I was incredibly upset at this point of time.

The staff rebooked me on the flight UA20 to Amsterdam the following day (25 hours delay!). But this is not the end. Like nearly all my flights on this itinerary, UA20 was delayed as well (2 hours because of a wheel change) with the difference that boarding was completed, so all the people sat on their places in the „big“ 777-200.

So to look over this: There was a delay on the connection flight to Managua, a cancellation and rebooking on the following day due to mechanical problems plus yet another delay and misconnect on the newly booked flight.

Last week Axel wrote us another email about the outcome of his complaint to the responsible United Airlines department heads.

Just as an update for you and maybe you’re interested in it: United response to my request was to give me 25000 miles and 2x 500$ travel voucher.

That’s a pretty good compensation because it goes well above what United would have to pay you in any case, 600 EUR cash compensation for the 24h+ delay into Amsterdam.

Complaining directly to the email address of United Executives seems to yield in proper processing if the complaint is reasonable.

United decided in this case to compensate the passenger properly, probably knowing all too well that in case the passenger demands it they will have to shell out 600 EUR cash under EC261/2004.

For the other delays and inconveniences they added the miles as an extra on top. That’s nice of them because they weren’t obliged to do that.

Giving out vouchers instead of money is always a preferred way of the airlines because a large number of vouchers is actually never used and will expire. However our reader is United 1K member and therefore likely able to use these vouchers and the miles in a proper way. Congrats to this compensation success!