Singapore Airlines is chiming in with other airlines to effectively ban hoverboard toys from all of it’s flights citing safety reasons. 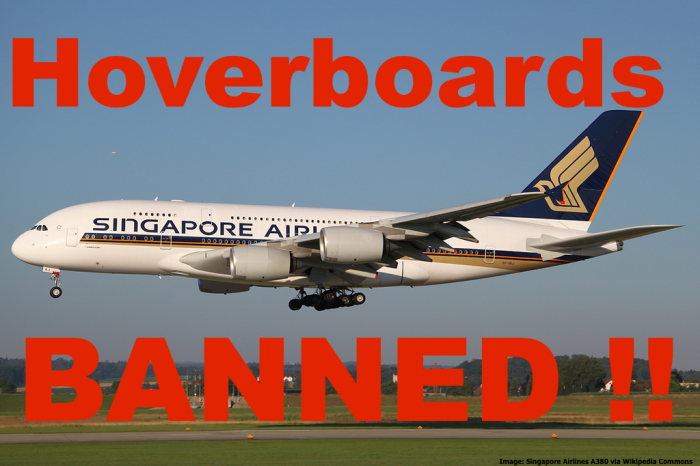 This comes as several airlines including all U.S. legacy carriers already restricted passengers from taking these electronic gadgets on boards after several of them exploded during regular use or storage.

These innocent and fun looking toys have been responsible for some injuries and substantial damage in the last few months, some of which melted down/exploded and even burned down homes.

After the major U.S. airlines already banned these gadgets as USA Today reported (see here) now the wave of caution swaps over to Asia and Singapore Airlines announced today that effective today 21. December 2015 it is no longer allowed to carry Hoverboards on board or even check them in as regular baggage.

You can read more about it in this Straits Times article (access here).

Singapore Airlines (SIA) said it will stop passengers from Monday (Dec 21) from carrying hoverboards – self-balancing electric scooters – on all its flights, whether as carry-on or checked-in luggage.

In a statement, the airline said the ban was for safety reasons.

SIA said on its website that it prohibits passengers from checking in or carrying on board lithium batteries with watt hours more than 160 or a lithium content of more than 8g. These include electric segways and electric bicycles. …

SIA subsidiary, Tiger Airways has also banned hoverboards, uniwheels and electric scooters on its flights s regardless of the watt-hour rating of the lithium batteries in such devices. …

Though hoverboards are said to be among the hottest gifts this holiday season, they are now banned from British Airways, Virgin America, Alaska Airlines, JetBlue, Delta, American and United flights. Last week Malaysia Airlines also banned them on its flights.

This is probably a wise strategy given the extensive damage that has been caused by the toys, most of which originating from cheap manufacturing in China.

I have seen children and even adults using these boards in the airport and find it ridiculous why public space has to be treated as a playground in the first place. Such items have no place in either form of public transportation totally unrelated to the incidents described.

Either way, this is more about being careful with lithium batteries instead of a crusade against hoverboards. This is nothing new either, electric toys such as remote controlled cars are forbidden on board for a long time already.

Singapore Airlines just announced a rather surprising new routing today for their winter schedule as they will serve Vancouver, Canada...