A British family of eleven people, all of them Muslims with a distinctive name, waiting to board their flight from London-Gatwick Airport to Los Angeles were told minutes before their flight boarded that they are restricted from flying to the United States. 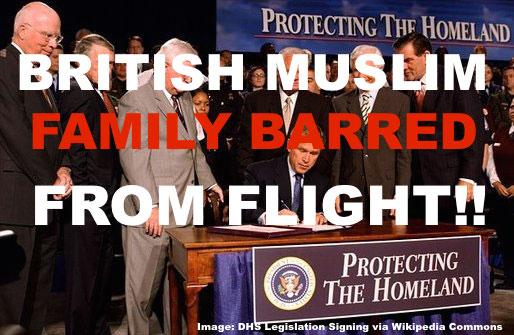 Supposedly these orders came from the Department of Homeland Security in Washington D.C. after something triggered their attention to the family en route to a Disneyland vacation.

The case has by now reached the highest echelons of British government with the Prime Ministers office commenting that PM David Cameron will personally look into the case.

A Member of Parliament has escalated this to senior political leadership after the case was publicized in the media for about a week and no information from the U.S. Embassy which she reached out to for an official inquiry was forthcoming (this is not surprising though).

A British Muslim family heading for Disneyland was barred from boarding a flight to Los Angeles by US authorities at London’s Gatwick airport amid concerns of an American overreaction to the perceived terrorist threat.

US Department of Homeland Security officials provided no explanation for why the country refused to allow the family of 11 to board the plane even though they had been granted travel authorization online ahead of their planned 15 December flight.

Senior politicians have been drawn into the case, warning that a growing number of British Muslims are being barred from the US without being told the reason for their exclusion. Aides to the prime minister, David Cameron, have promised that he will examine the case, which comes as a leading community group in the US has warned that Muslims are being subject to “an unprecedented and dramatic increase” in violent and hostile incidents.

It would indeed be interesting to see statistics on how many people are being denied boarding on their flights after the preliminary check of the DHS against Terror Watchlists and No Fly Lists. Based on the names and ethnicities one could certainly see a pattern if there is any.

You can find a related article in the Washington Post (see here).

“Mickey Mouse – I’m looking forward to seeing you tomorrow,” Mahmood’s 10-year-old niece scribbled in her diary, alongside a colorful illustration complete with oversized ears. “I’ve got to go now. We’re getting on the plane.”

But they never did. A border control officer, on orders from Washington, intervened, Mahmood said, telling him and his brother that their family of 11 had been barred from the flight.

U.S. officials strongly denied that the Mahmood family was targeted based on their religion. But the case prompted America’s largest Muslim advocacy organization to call for an investigation into whether Republican presidential candidate Donald Trump’s proposal to ban Muslims from entering the United States was being “implemented informally” by the Department of Homeland Security (DHS).

I personally doubt that a federal agency of any country would put a policy into place that is based on a public office candidates suggestions, contradicting the active administration. Unless someone alleges that the government of the U.S. has adopted such a policy I’d say such a suggestion is nonsense.

U.S officials said little about the case on Wednesday, citing federal laws protecting the privacy of air travelers. But they emphasized that under U.S. immigration law, a traveler cannot be denied admission into the country due to “religion, faith or spiritual beliefs.”

The U.S. Customs and Border Protection agency said in a statement that the law lists more than 60 other possible reasons for inadmissibility including “health-related, prior criminal convictions, security reasons, public charge, labor certification, illegal entrants and immigration violations, documentation requirements and miscellaneous grounds.”

What could have happened here? If the name of the passenger indeed matches a name on the No Fly Lists established by the government then there are instructions in place to try and clear the people involved for their flight. This usually happens at check-in though and not after they already received their boarding pass. To be actually barred from the flight could happen because there is not enough time left to clear the passenger because the information required is so detailed that it can’t be obtained in the little time until departure or the person in question is indeed the individual on the list.

Neither of both seemed to have been the case here, on top of that the whole family has been ESTA approved in preparation of their travel plans.

Travelers who encounter such issues with name mix ups frequently can (and should) apply for a so called redress number which is issues by the Department of Homeland Security and can be inserted into frequent flyer and reservation profiles to avoid problems as much as possible.

A redress number is provided to persons who have filled a redress inquiry with the Department of Homeland Security to seek resolution to difficulties encountered during the transportation security screening process. The redress number is up to 13 digits.

Someone fouled up in this case and it shows the processes are not as clean cut as they should be. Not only that, they are subject to failures and mistaken identities and can truly traumatize people (especially children) who are sensitive to such matters especially in a situation as described here.

I’m not surprised the U.S. Embassy won’t provide the information requested to a simple inquiry even to a Member of Parliament. Such requests are if at all entertained if they come from an institution of the government related to the matter. I’m sure there will be some follow up from PM Cameron’s office since it’s such a full blown PR disaster now.