Another Wednesday, another Whine. Today we revisit a matter that has been subject to discussion beforehand: People who make themselves comfortable and take a nap in the airport lounge or hotel facilities.

Just this week we have encountered two prime examples of such nuisance in different parts of the world.

Travelers often go through different time zones and have long transfers. This is exhausting and I would lie to say that I didn’t fall asleep before at an airport lounge.

But some people take it to the extreme and behave like these spaces are their personal living room, ready to kick off their shoes and stretch on the sofa.

The above featured image was captured by myself 2 days ago at the St.Regis Tianjin, China where a gentleman slept in full length on the sofa at the St. Regis Bar. Mind you, this was during operational hours at 9:30pm and nobody from the staff was making advances to wake him up or consult a manager to do it.

A few months ago I wrote about loitering of passengers who made themselves comfortable at a Cafe inside the Kuala Lumpur Departure Terminal, also during operational hours (access here).

Last week John took the following photo of a passenger at the LAN Lounge in Sao Paulo who also used the couch as his personal bed. 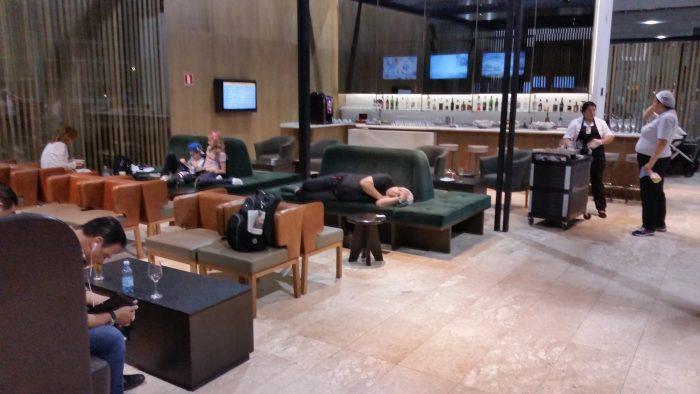 While I can sort of understand napping in a lounge, the situation at the St. Regis Bar is completely unacceptable. This is a facility where people pay to have a drink or some food. Not a space to kick up your feet and doze off.

People should consider spending some money on a dayroom during very long layovers, respectively try to nap in a position that doesn’t involve lazing feet up on the furniture. It’s just not a pretty sight and contributes in any way positively to the lounge experience for other customers.