During my visit to China last week I found that one of my most frequented Hotels now has a Currency Exchange ATM in their lobby, right next to a regular ATM.

I found 2 receipts from previous users that left them behind and decided to take them with me to research on the rates used by this machine and feature it here on LoyaltyLobby.

Sometimes we just need a small amount of local currency when staying a day. Or we find ourselves running out of cash but still having to go back to the airport by taxi. Some hotels offer a convenient currency exchange at the Front Desk without excessive commission while others outright fleece you and make it complicated.

After inspecting this CE Machine (same brand as you often see in the airport) I found that it also requires you to scan your passport. Fair enough as long as this scanner works properly, I didn’t attempt to use it myself by the last 3 attempts to scan my passport at similar machines always resulted in having to adjust the angle etc.

Here are the two receipts I found: 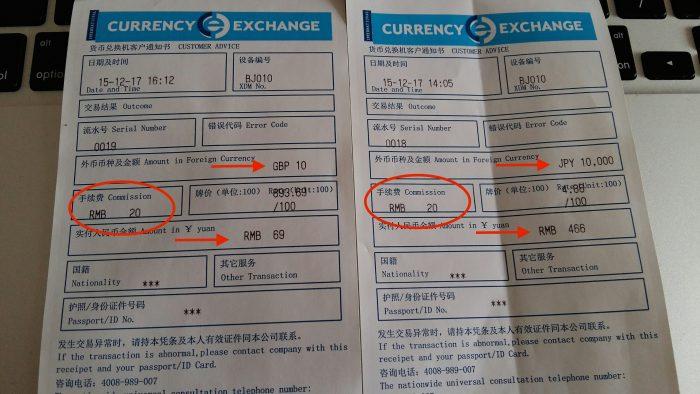 One customer exchanged only a 10 GBP note for which he got 69 CNY in return after a commission of 20 CNY and the basis rate they used to convert the currency.

The second customer exchanged 10,000 Japanese Yen and received 466 CNY which shocked me a little but is merely a sign of the weak Yen and the strong Chinese Yuan (thank god I’m back in Japan now!).

The 20 CNY commission isn’t very high and I’d say ‘acceptable’ plus after researching the daily rates on XE I found the exchange rate used not too far off either (around 1.9% which is in the lower end of currency ‘fouls’).

I would only use a service like this or any currency exchange for the matter if i need just a small supply of local currency and favor using a regular ATM most of the time for any amount larger than 50 EUR/50 USD equivalent.

Depending on your currency needs I suggest you look into options of getting a bank- or credit card that allows for free withdrawals abroad in order to avoid being dinged by too many fees.

Banks can charge from 3$ (Chase USA) to 5,98 EUR (Commerzbank Germany) for just using a foreign ATM plus whatever the local bank levies on you. For small amounts it’s much better to just exchange some leftover cash to avoid this.