Qantas Frequent Flyer has announced some time ago that effective today, January 6th 2016 they will reduce some of award levels and surcharges for some of their Economy Class Classic Awards.

Qantas has had some surreal levels of mileage requirements and surcharges in their frequent flyer program for quite some time and just now they are touching the most basic awards in Economy Class.

Those who has had a closer look at the program of Qantas notice that apart from a few sweet spots such as being able to obtain Lifetime status relatively easy if you have a lot of flying activity, the ability to actually redeem an award for a reasonable price in miles and associated taxes/fees is almost non existent.

The announcement Qantas made (access here) pretty much outlined a few changes they would made concerning only their Economy Class Classic awards, showing a reduction in miles between 5-10% depending on the distance and a reduction of the levied fees (fuel surcharges) resulting in up between 15-40% less payment in $.

One can argue about the required points for a ‘free ticket’ being already out of touch but as you can see the fees for the whole booking are what’s really outrageous. Even after the reduction, requiring 700 AUD for a flight between Sydney and London plus 120,000 Points is simply crazy and I’m not even talking about the scarce availability.

The redemption for Qantas miles is based on distance. This is how it was before January 6th: 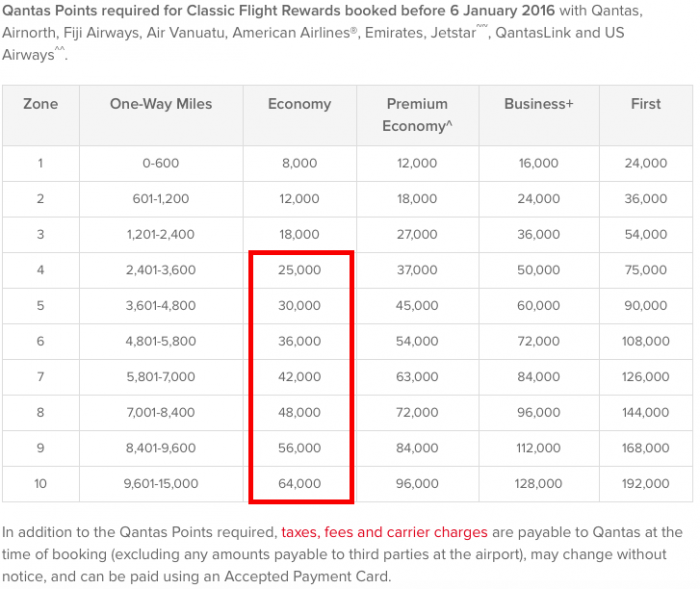 And to compare it, the following is the chart in effect from today onwards:

As you can see the changes only concern the Standard Economy Class award from Zone 4 (2,401-3,600 miles of distance) upwards.

Having lived in Australia myself for a while and after messing around with the rewards programs available I came to the conclusion that it’s relatively easy to collect large number of miles so the required points on these charts is not necessarily as bad as it might appear on the very first sight, however both Qantas Frequent Flyer and also their direct competitor Virgin Velocity are not competitive in international comparison for example against Singapore Airlines KrisFlyer. Especially in Premium Class redemtions.

Don’t get me wrong, any reduction in reward levels and surcharges is a good step forward and Qantas is simply reacting to the market situation that has seen fuel prices drop to the bottom and airline tickets even from the traditionally expensive Australia market lower as well. It was simply unreasonable to not adjust in the very least the Economy Class pricing structure at some point.

If you collect Qantas points through credit cards, credit card referrals, merchandise shopping etc in the Australian market then the program might provide some interesting redemption options and won’t hurt as much. If however you collect your miles through flying activity I suggest to have a look at another program with a more lucrative earn vs burn ratio.