Three guys on board a flight leaving Beijing’s Capital airport who thought it was funny to pose with some equipment that looks like a gun were met with outrage in Chinese online sources. 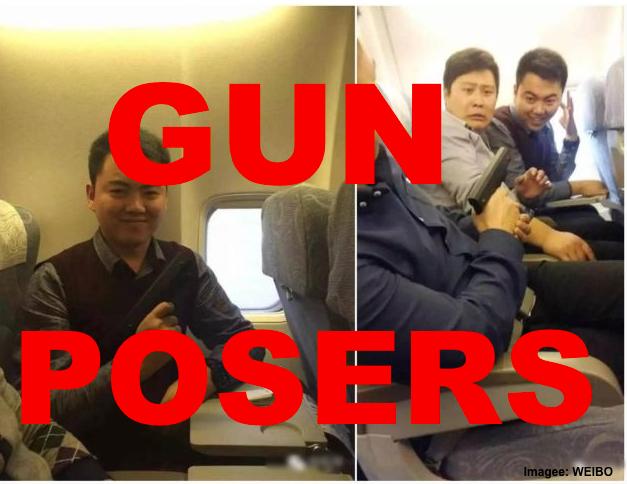 What was probably meant as a spur of the moment joke and banter escalated once the three chaps uploaded their escapades wo WeChat from where the images spread quickly to Weibo and other websites.

The images actually look kinda funny and the object is likely some computer equipment such as a laptop battery but I would still think twice about uploading it considering the swift action Chinese authorities take against such offenders these days.

I found this story on the Shanghaiist (access here) which is always an entertaining and reliable source to uncover misconduct of Chinese travelers at home and abroad.

A trio of brilliant chaps in China decided it would be funny to pose for a photo with what appeared to be a gun while seated on a freaking airplane. The photos have subsequently made their way onto Chinese social media, first hitting WeChat on Sunday before going viral.

While many viewers at first glance were shocked to see a gun on a flight, upon closer inspection astute observers pointed out that the gun was most likely fake, and probably a laptop battery made up to be used as a prop gun.

While the act has been roundly criticized by all viewers, opinions on what should be done have been mixed.

Under regulations set down by China’s civil aviation authority, guns, knives and fake weapons all fall under the scope of contraband, but, as some users pointed out, security checks would have never flagged a laptop battery in the first place. …

If you inspect the images further it really doesn’t look like a real gun but I guess it’s the gesture that enrages most people. 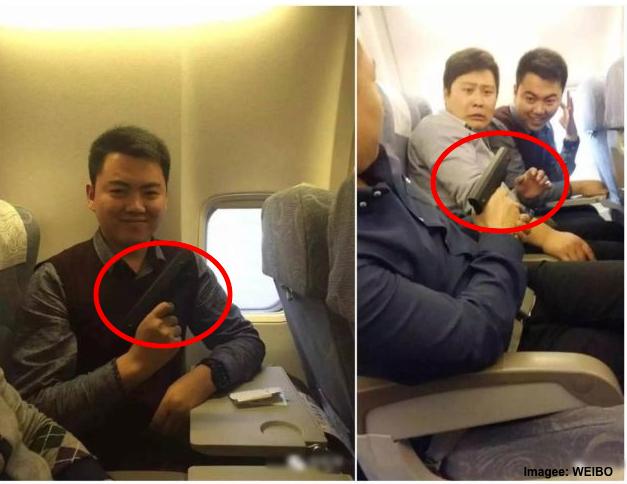 I remember having a lenovo Laptop a few years ago that had a similar odd shaped battery so it could be indeed just that. Actually I highly doubt there was any real danger to anyone and that this doesn’t even constitute breaching the law in any way.

In the interest of air safety and considering how easily people get scared these days it’s still not the brightest idea to upload these pics on social media. These guys certainly got more attention than they bargained for.