The friendly skies of United Airlines ain’t so friendly anymore which was proven once again this week when the Department of Transportation fined the carrier 2.75 Million USD for violating the law. 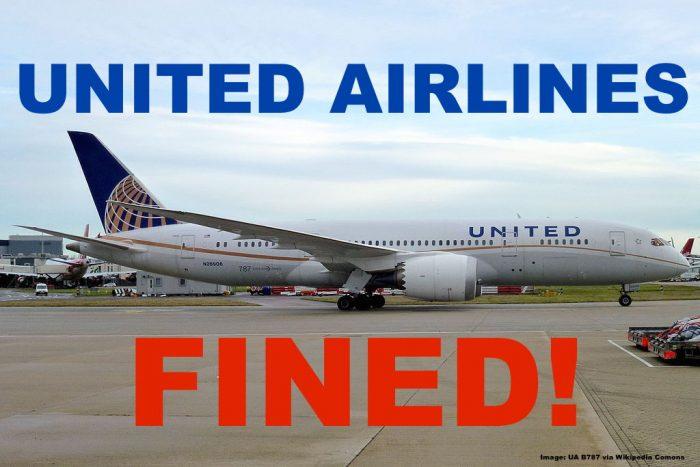 The Department of Transportation (DOT) substantiated that United doesn’t comply with regulations concerning treatment of disabled passengers and stranding passengers during tarmac delays.

This has been a turbulent year (actually a few years already) for United Airlines who was under performing their competitors in profitability, went through a chaotic merger that still doesn’t see the two carriers fully integrated and the sudden departure of reviled CEO Jeff Smisek who was succeeded by Oscar Munoz who just had a heart transplant surgery (best wishes to Mr Munoz for his recovery by the way!).

This recent investigation by the DOT came after analyzing consumer complaints made directly to the DOT as well as data the airlines have to submit to the department about their performance. 2.75 Million is one of the larger fines issued in recent history.

The LA Times reported about the matter (access here).

The U.S. Department of Transportation has fined United Airlines $2.75 million over the carrier’s treatment of disabled passengers and for stranding passengers on delayed flights for more than three hours.

The federal agency said an investigation of United Airlines’ treatment of disabled passengers was sparked by “a significant increase in the number of disability-related complaints.”

“A review of these disability-related complaints revealed that United failed to provide passengers with disabilities prompt and adequate assistance with enplaning and deplaning aircraft,” the  Transportation Department said in a statement. …

Of the $2-million fine assessed over the violations against disabled passengers, United has agreed to spend $150,000 to improve audits of its wheelchair vendors and $500,000 toward developing the technology to make it easier for passengers to request wheelchairs. …

Under a 2010 rule, commercial airlines are prohibited from holding passengers on a delayed flight for more than three hours without giving them the option to leave the plane. The time limit extends to four hours for international flights.

I really liked flying United in the time around 2007-2011 when I lived in the U.S. but all of a sudden customer service and reliability began to drop dramatically and service recovery went down the drain as well so I decided to give my 1K status up and switch completely to competitors.

These instances are a representative sample of how United treats their customers, even though to be fair I find that domestic travel in the U.S. is more like going on a Greyhound with wings.

The fines levied by the DOT against airlines are designed to serve as a deterrent against future irregular behavior an noncompliance. However often the fines are not even close to be high enough to justify for an airline to stop certain practices.

It’s often cheaper to just pay a fine instead of drastically changing processes and providing overall better service. At least until the customers start to abandon the airline in droves.