A LoyaltyLobby reader sent me an email about frustrating United Airlines award issue when Turkish Airlines canceled one of the flights and refused to rebook at the airport. 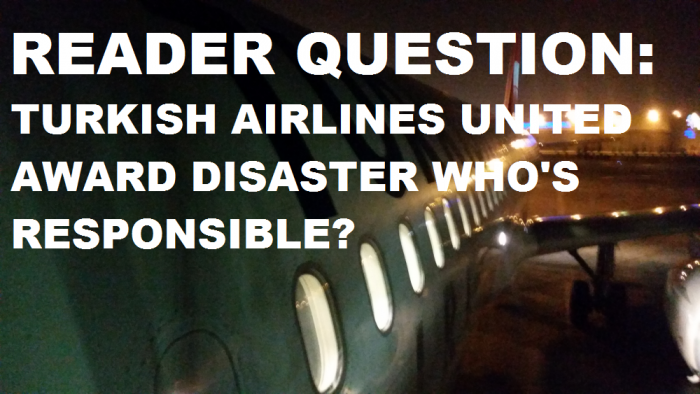 I have been stranded in IST at my own cost after Turkish Airlines cancelled a flight on my United award ticket without notification.

I arrived for my flights at TLV on 8/1/16, I was to fly TLV-IST-SSH all on TK.  Check in agent said TK stopped flying to SSH but I was never notified.  She called TK in Istanbul and they told her to put me on the flight to IST and everything would be sorted there.

I arrived in IST (by the way that flight was also around two hours late which I believe also entitles me to compensation, at least according to Turkish Airlines pamphlet).  I definitely would have missed connection).  After 5+ hours pleading with agents I was told the only thing they could do is put me on the next flight to TLV, which made no sense as I just left Israel and my next flight on the same ticket was leaving EGYPT end of January.  They said this is because the flight was from award miles with United Airlines.

Even though I specially was told by the Turkish Airlines agent in TLV and a supervisor in IST that I would have my visa fees covered, for having to enter Turkey to figure this out, hotel, and new flight to another active location the agents in IST would not cover any of this.  They wouldn’t even let me use a phone to call either Turkish Airlines or United Airlines until I had been complaining for 5 hours.

In the meantime I finally called United when I could get a wifi connection to use skype by paying at a cafe.  A United agent told me that Turkish Airlines was responsible for this mess as they never contacted me.  The agent said they would change my flight on their own goodwill to next available flight on Monday 11/1/16, when I had a hotel booking for Cairo.  In the meantime I have had to pay my own visa fee, hotel, food.  Also I have lost money on the hotel bookings for first nights of my trip in Sharm el Sheikh, and of course the frustration of trying to figure this out for hours in the middle of the night which literally brought me to tears at one point.

Please let me know what you can do to fix this situation.  It has been completely unacceptable so far.  I have also submitted a complaint to Turkish Airlines but everyone I have talked to there (normal agents, supervisors, cancellations office, customer service office) have indicated it’s not their problem and to not expect anything.

I can send original reservation, new one so you confirm I am stuck in IST now, visa receipt, hotel booking, expenses in IST, etc if needed.

What can go wrong when one issues an award using United MileagePlus miles for Turkish Airlines flights? A lot!

Turkish Airlines representative at the Tel Aviv airport told you that you were going to be rebooked to your destination (SSH) in Istanbul. When you got to the Istanbul, Turkish Airlines refused to do anything due to it being an United Airlines award ticket.

Whether the ticket is paid or an award issued by United Airlines or Turkish, doesn’t really matter at all. According to the Star Alliance employee book, award tickets are handled exactly the same way as paid ones in case of irregular operations.

The problem here is that Turkish Airlines is very difficult to deal with and they are known to do the absolute minimum (or far less) what they are required.

You incurred extra costs due to this and would like to get them reimbursed. You can forget getting anything out from Turkish Airlines without taking them to court that is one option.

I would gather the receipts and send a short and concise email to United Airlines. Turkish Airlines canceled a flight, informed United but United failed to inform you that caused the following expenses for which you would like to get reimbursed for.

It is unclear from your email where you actually live. If United refuses to pay, I would escalate the issue to national ombudsman or file a case with the small claims court and have both United Airlines and Turkish Airlines as the defendants.

I hope that you’ll get the issue resolved and that you keep us updated.

Airfare of the Day [Business Class] TURKISH AIRLINES Singapore to London from $1,886