There are short/medium haul flights leaving from Chicago’s O’Hare and some other airports that are catered with water only. United Airlines is now proactively emailing some customers affected with this change. 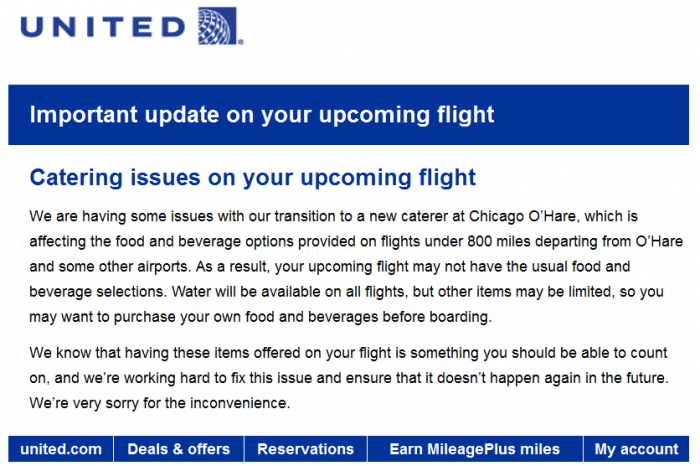 You would think that United Airlines would have implemented this caterer change better at its major Chicago hub, but this is United after all……

You can ask compensation for this from United, although they may try to brush you off. Here’s note from a reader that took United flight this past Tuesday and forwarded the email above from United:

I experienced this issue on Tuesday as we sat at the gate for 15 mins waiting for catering service. After 15 mins we left without it.  When I blew up United on Twitter they said they didn’t compensate passengers for catering issues I did get an email the next day apologizing for the inconvenience and a link to 2500 miles. I received the email below after I checked in for my flight. How can they have issues at ORD when it’s their main hub. Thought I would pass this along.

United had similar issues when they switched their caterer at LAX few years ago. Some flights were not catered with anything because catering trucks couldn’t make it to the airport in LA traffic.

You would think that someone at the United could have thought this move better? United Airlines advertises being “Flyer Friendly” after all….