This weeks patient at the Compensation Clinic has been referred to us by one of our readers who had two unpleasant incidents with United Airlines.

Being a United 1K member our reader managed to extract a good amount of miles from United for his experiences on these two separate occasions.

Having a bad day on board United Airlines is nothing new. Just yesterday John wrote a piece about United’s more or less fertile attempts to avoid irritating their customers (access here).

This week our reader Kevin from San Francisco forwarded us a case he opened with United Customer Relations. He writes:

I had some bad experiences with United this week. First one was during my flight from SFO-ICN where the bathroom was a total mess right after meal service and stayed that way during the entire flight. The second happened on EWR-SFO where our flight was delayed until late night and I was promised in Newark that the station in San Francisco would issue me a taxi voucher for transportation. Arriving in SFO the local staff told me ‘such a thing doesn’t exist’.

Kevin was nice enough to forward us a few pictures he took during his trip including this one:

This is obviously a clogged wash basin. Question is how and when this happened and given his account that this was short after takeoff chances are the crew in SFO missed to fix this from the previous flight. 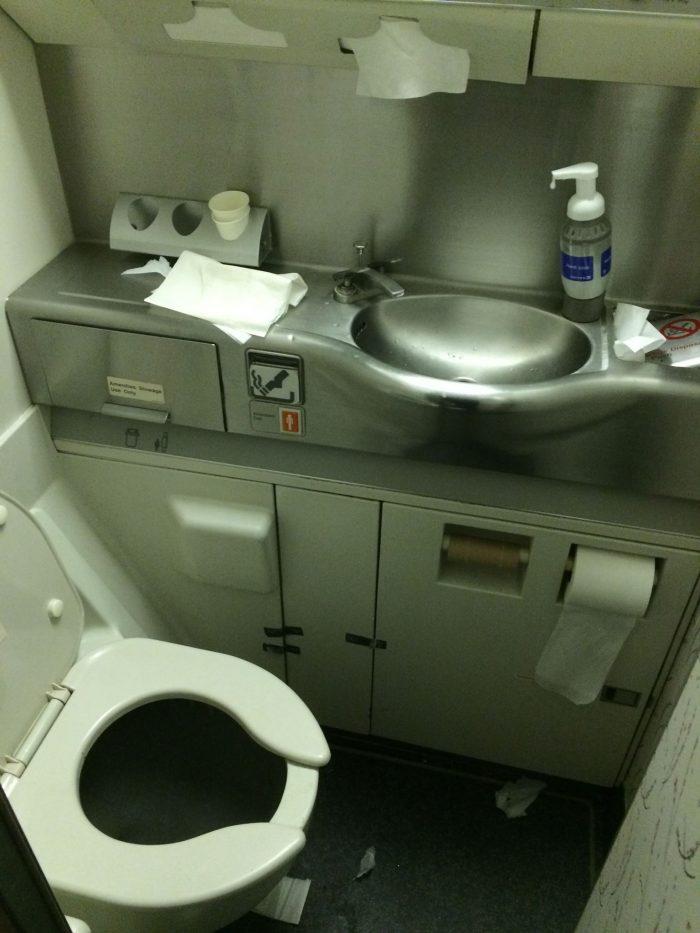 Here a broader image of either the same or another lavatory on that flight in quite a desolate condition. Not very appetizing if I may say so.

I opened two separate complaint files for this and received 8,750 Miles for the dirty lav and 9k miles for the taxi voucher and delay. In total 17,750 Miles Compensation.

Obviously the customer being a 1K member get’s treated a bit better than a lower tier would be responded to in such instances. Referring back to the Bloomberg article John referenced in his piece it’s just another piece in the puzzle which represents the tragedy of being a United customer these days.

I think this is a reasonable amount and the isolated incidents shouldn’t represent the standard of United Airlines operations. Unfortunately agents who lie to the customer to make their own life easier such as in the case of the promised taxi voucher are not rare.

I also encountered a similar incident with an absolutely disgusting washroom on board Air India from Bangkok to Mumbai last year. The image was too disgusting though that we could publish it here.