You’ve got mail! A Flight Attendant on an unnamed airline reportedly received a note scribbled on a napkin seeking for help against a farting passenger on board. 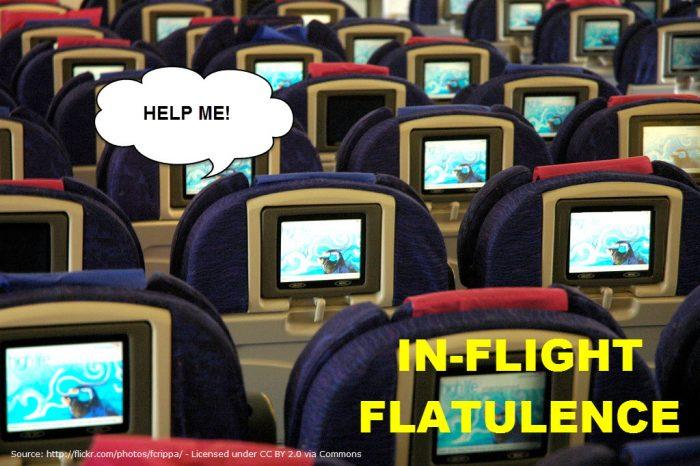 The note asks in graphic words that the flight attendants please make an announcement to stop a passenger in the cabin from continuing to fart.

A type of note you don’t get every day. Maybe flight attendants sometimes get a secret note with a phone number or email address but this is certainly unique.

I read about the story in The Daily Mail (access here) that also published an image of the note in question.

Inconsiderate passengers can make even the smoothest of flights a stressful experience.

Just ask one disgruntled traveller who took issue with one particular neighbour – in the areas of rows 10 to 12 – who kept passing gas during the journey.

In fact, things got so bad at one point that the unhappy passenger even went so far as to pass a desperate note, written on a napkin, to a flight attendant. 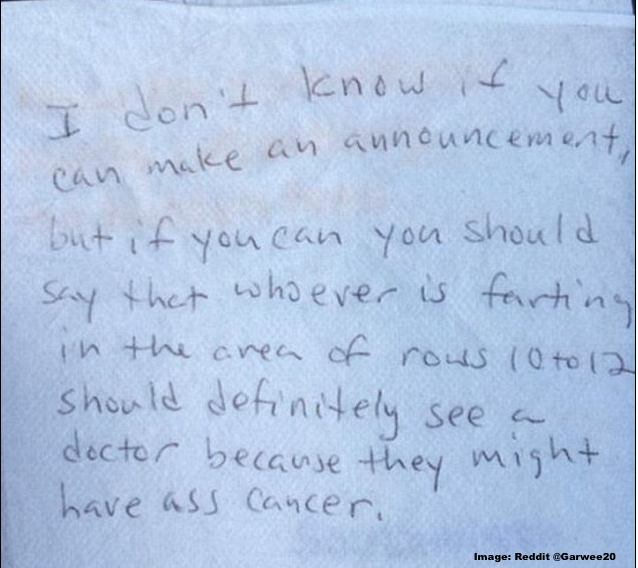 The plea for help was then posted to Reddit (access here) by user Garwee20, who wrote: ‘My flight attendant mom got this napkin from an upset passenger.’

‘I don’t know if you can make an announcement,’ the note reads. ‘But if you can, you should say that whoever is farting in the areas of rows 10 to 12 should definitely see a doctor because they might have ass cancer’.

Of course, many Reddit users were curious as to whether the flight attendant actually made the announcement. (She didn’t.)

This isn’t the first time flatulence has caused trouble in the air.

I remember writing about that incident with the goats back in November (access it here). It’s one thing though to to have a Cargo Plane making a landing due to a sensor message or if you sit on a passenger plane and a fellow passengers is making your ride a cruel journey of torture because he can’t hold his Burrito in.

I can’t imagine what brings someone to write such an explicit note and then hand it over to the flight crew. Nevertheless the passenger in question must have felt really frustrated.

Not all aircraft these days have individual air vents anymore that could provide relief in such a case. Sometimes sh*t happens I guess.

Airfare of the Day [Business Class] ETIHAD London to Cape Town from £1,426