The Northeast of the United States braces for a record snowstorm this weekend and it is expected that this will disrupt all ways of transportation including air travel on a large scale. 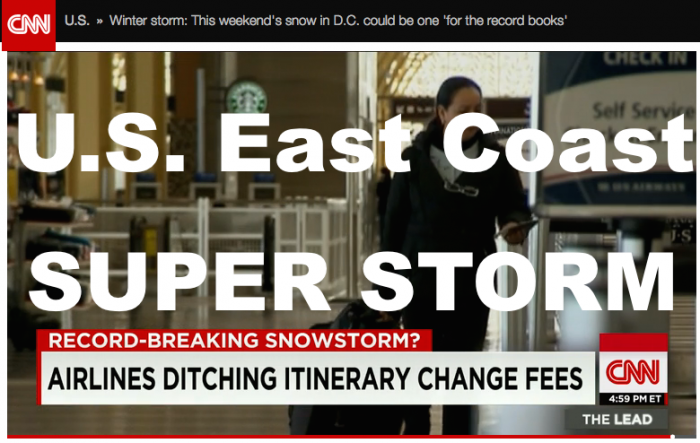 While the residents of D.C. and surrounding states prepare for the storm, the airlines have put travel waivers in place allowing for cancellation or rebooking of itineraries effected.

Airports such as Washington-Dulles and New York are always bad news even with the slightest weather issue but this storm will for sure lead to the cancellation of the majority of flights, especially domestic and regional routes.

A nasty snowstorm is expected to bury the Washington, D.C., area beginning Friday, and possibly surpass totals for a benchmark 1922 storm.

The National Weather Service on Wednesday said it expected between 12″ and 24″ of snow to fall in the District of Columbia, Baltimore and surrounding counties by late Saturday. Those totals could be adjusted up or down depending on the exact track of the storm, which is targeting the mid-Atlantic region.

CNN meteorologist Tom Sater says a computer model shows the capital will be the bull’s-eye for up to 30″ of snow by Sunday. …

As of Wednesday, it was too early to predict exactly where the heaviest snowfall will happen, but the mid-Atlantic region seems to be in the crosshairs.

The big three U.S. airlines (among others) have published travel waivers on their websites.

A one-time ticketing fee will be waived for travel changes if you:

Are traveling on American Airlines or American Eagle; Bought or purchased your original flight before January 20, 2016 ; Expected or scheduled to travel January 21 – 24, 2016 to/through/from the affected airport(s);  Flexible to travel January 20 – 27, 2016;  Do not make changes to your origin or destination city ; Book in the same class of service.

If your flight is canceled or significantly delayed, you are entitled to a refund. Even if your flight is not canceled, you may make a one-time change to your ticket without fee if you are scheduled to travel to, from, or through the following destination(s) on Delta, Delta Connection®, or Delta-coded flights during the specified time periods listed.

The change fee and any difference in fare will be waived for new flights departing on or before January 20-27, 2016, as long as travel is rescheduled in the same cabin (any fare class) and between the same cities as originally ticketed.​​

As you can see the waivers vary somewhat depending on the airline. I find U.S. based airlines quite reasonable and flexible as far as rebookings during irregular operations are concerned as long as there are seats available, especially if you have elite status.

I’d say it’s a good idea trying to avoid any non-essential travel to or via the effected cities in the northeastern Unites States. If you have to change your ticket I would try to do this through the airlines website and only if that’s unsuccessful call their hotline. All reservation hotlines including the elite lines are usually choked during such times and why make life difficult if online rebooking is an option? Good luck!