The Budget arm of Thai Airways, Thai Smile, has released an internal memo saying that passengers can now fly with their spiritual dolls who will have their own seat and be served meals. 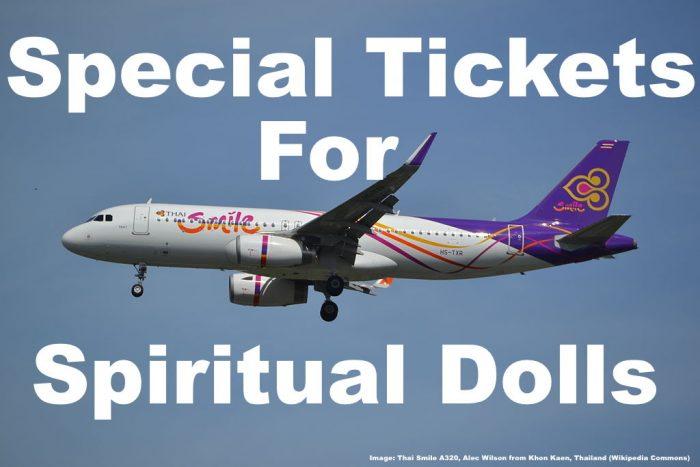 The dolls, commonly known as ‘Luk Thep’ are small child-like figures who have a ghost appearance and are believed to have supernatural powers.

There is quite a craze these days in Thailand involving such dolls with actors bringing them on their TV show and you see people carrying them on the street or in the mall every now and then.

Bloomberg news (access here) was among the first who reported about that internal memo concerning the treatment of such dolls and the new availability of child fare tickets.

Thai Smile Airways, which is a part of national carrier Thai Airways International Pcl, said in an internal memo that dolls with tickets will be served snacks and drinks, though they will be barred from sitting in exit rows. Owners who take dolls on the plane without tickets will have them treated as carry-on luggage.

The dolls known as Luk Thep, or Child Angels, have become increasingly popular in Thailand after several celebrities extolled their benefits. The dolls, which can sell for hundreds of dollars, are thought to possess the spirits of child angels and their owners pamper them with brand-name clothes and accessories due to the belief that a well-cared-for doll will bring good fortune.

The memo from Thai Smile explains to staff that the Luk Thep dolls can be treated like children because they have undergone a “spiritualization” process that breathes life into them. In addition to being barred from exit rows, the dolls must also buckle up during take off and landing.

This sums it up perfectly and I think the image paired with the information of the article and the actual recognition due to a ‘spiritualization process’ tells you all you need to know about this topic.
Conclusion
This takes emotional support company to a whole new level. Last week I wrote about a lady who took her emotional support turkey cross country (access here) and now this. Though I think there is a line between taking a live animal such as a dog with you for comfort and spoon feeding a doll next to you.