Usually when a plane has to divert due to unruly individuals it involves a passenger but on a Delta Airlines flight last week two Flight Attendants battled it out in a fist fight. 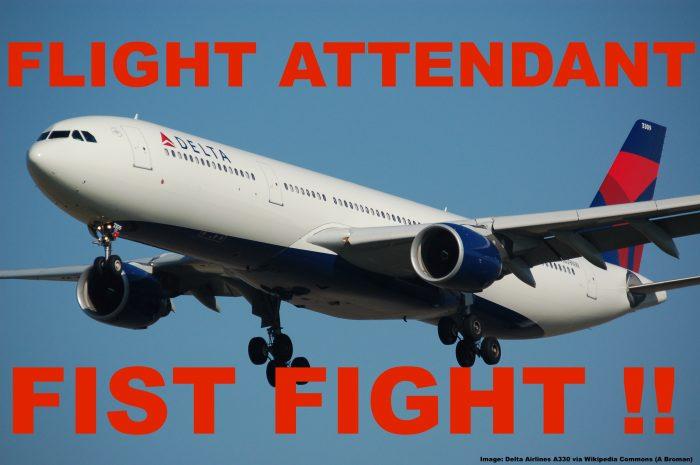 The pilot subsequently diverted the plane to Salt Lake City where the respective crew members had been taken off duty and the plane continued it’s journey  to Minneapolis.

Delta Airlines flight 2598 from Los Angeles to Minneapolis provided some special inflight entertainment for their passengers that got a front row seat over the two female flight attendants battle in the skies.

Yahoo News (access here) reported about this yesterday after only a little by-line on the Aviation Herald showed up in regards to the incident.

The skies weren’t so friendly on a recent Delta Air Lines flight. After two female flight attendants got into a fist fight on flight 2598 traveling from Los Angeles to Minneapolis, the captain decided to make an unscheduled landing in Salt Lake City.

According to the Aviation Herald, the flight attendants had a disagreement over work issues on the Jan. 22 flight. A third woman on the plane tried to break up the fight and was also hit by the brawling flight attendants. At that point, the captain made the decision to land the Boeing 757. The plane was flying just south of Salt Lake City when the fight broke out.

I’m surprised there isn’t any mainstream media report about this or at least a cellphone video that could fill us in with more details.

Landing in Salt Lake makes logistic sense because it is one of Delta’s hubs and passenger who would misconnect in Minneapolis if the plane landed elsewhere can been rerouted easily on other Delta flights ex SLC. There will also be replacement crew available for all participants involved.

The airline sent a letter of apology to passengers that stated, in part: “Some of our team members did not display their best behavior. We expect our flight crew to be nothing but courteous and professional at all times and what you experienced was far from that. I am sorry we didn’t deliver on our brand promise for you today.”

You can say that again. For the inconvenience involved I’d expect to also see 10-20k Miles show up in the passengers account. Unprofessional!

Sometimes humans have a very short temper but in a work environment this is a bit risky. In my opinion these two flight attendants should be held to the same standards as other aggressive passengers who for sure would have been arrested and prosecuted after their removal from the aircraft.

Since Delta doesn’t have union protection in place I doubt the flight attendants will see the inside as an aircraft anytime soon as part of their work environment. They should be immediately terminated and the expenses for this stunt levied upon them.