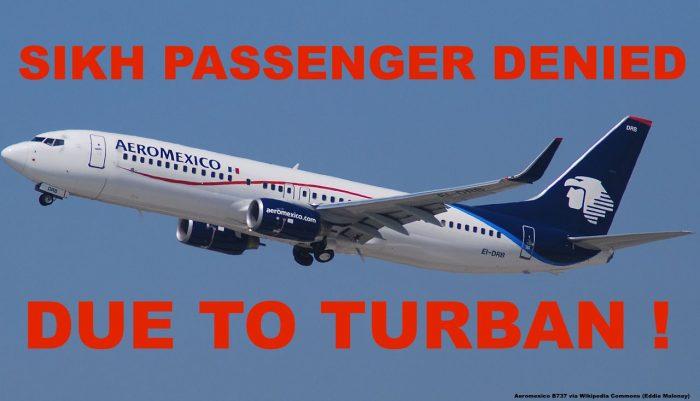 The term ‘That escalated quickly’ immediately comes to mind considering the developments in the matter. Actor and fashion model Waris Ahluwalia was pulled over for a rather stringent security check and then asked to remove his turban. He refused and was immediately informed by the airlines security staff that he won’t be allowed onboard an Aeromexico flight. Then it pretty much went downhill from there.

The New York Times reported about the incident (access here).

The actor, Waris Ahluwalia, who follows the Sikh religion and wears a turban, said he checked in at the Aeroméxico counter at Mexico City’s international airport about 5:30 a.m. and was given his first-class boarding pass with a code that he said meant he needed secondary security screening.

When he showed up at the gate to board Flight 408 to New York City, Mr. Ahluwalia said, attendants told him he needed to step aside and wait for other passengers to board. After they did, his feet and bag were searched and swabbed, he was told to remove a sweatshirt and he was patted down. Then, he said, he was asked to take off his turban.

“I responded matter-of-factly that I won’t be taking off my turban,” he said in an interview Monday afternoon from the airport in Mexico City. “And then they talked amongst themselves and they said, ‘O.K., then you are not getting on the flight.’ ”

He said he was told by another airline security official that he would not be boarding any other Aeroméxico flight until he met their security demands.

This is a slippery slope. I’m not familiar with the regulations in Mexico as far as privacy for such matters is concerned. For sure you can be asked to remove such head wear in any country for security purposes but most allow such procedures to be done in a private environment such as a cabin with a curtain.

“It is a symbol of my faith,” Mr. Ahluwalia said, explaining why he would not remove the turban. “It is something that I wear whenever I am in public.”

A statement released by the airline Monday said that Mr. Ahluwalia’s screening was in compliance with Transportation Security Administration protocol and that the airline had offered him alternatives to “reach his destination as soon as possible.”

This statement doesn’t make sense to me. What does TSA protocol has to do with security screening procedure at Mexico City Airport?

On Monday, Mr. Ahluwalia shared parts of his airport security story on social media, publishing an image of his boarding pass on Instagram. The letter “S” was printed on it four times and encircled with a marker — symbols he said were meant to alert airline crew that a passenger must go through an extra security check. 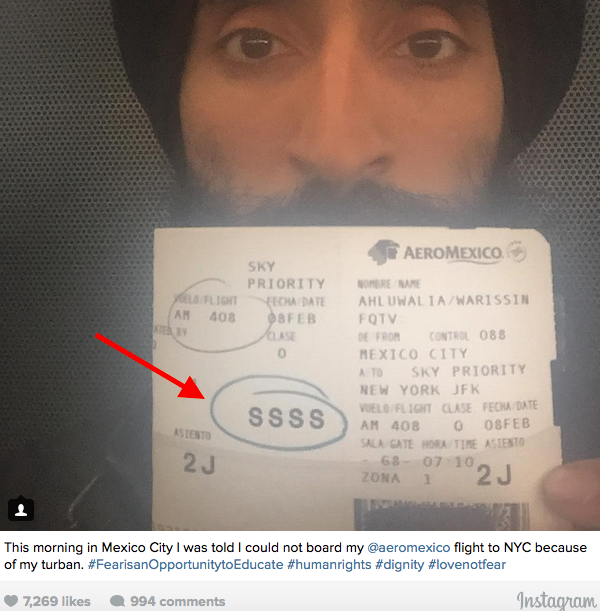 Now here we’re getting a bit closer to the matter. The SSSS security designator is not being placed at goodwill by check-in staff but by the computer based on risk factors (last minute purchased ticket, cash purchase, one way ticket, name matches against a security list etc). It is fairly common that whoever has this designator on the boarding pass will get a thorough frisking at security. Now the ball jumps again to the matter with the Turban, should they have offered a private location and does MEX have such a facility? (I would guess yes because what if they require a passenger to remove a shirt or pants). There is a piece of the puzzle missing here.

But then it get’s wild.

Speaking from the first-class lounge about five hours after the episode, Mr. Ahluwalia said he had contacted the Sikh Coalition, a civil-rights group for American Sikhs, after he was told that he could not board and that his bag would be removed. Some earlier reports had indicated he had offered to remove the turban in a private room, but Mr. Ahluwalia later said that he had not made such an offer

He was still at the airport more than 12 hours later. Mr. Ahluwalia said he planned to remain there as lawyers from the Sikh Coalition and Aeroméxico discussed the matter by telephone. He said he had no immediate plans to board another flight.

This is tricky. He is at an international airport in the transit zone with no intentions to travel, taking a political or religious stand. As a foreign national Mexico could deport him immediately on the next plane they deem fit and I can think of more than just a few countries that would do just that.
Conclusion
It’s good and fair that he uses his standing and public persona to highlight cases of discrimination but things should be put in relation. The fact that he was already selected for special security measures leaves only the brash security agents and their misguided decision to immediately deny him boarding.
Him remaining in the departure zone without a valid ticket is definitely illegal so he should either go back through immigration or get a ticket home. Stubborn actions such as these don’t lead to any positive outcome.
Previous Post