Let me start saying that I like Uber and I have used it a lot. I used the service 34 times in January alone in Ho Chi Minh City, Johannesburg, Cape Town, Beijing, Manila, Tokyo, Bali and probably some other cities as well. 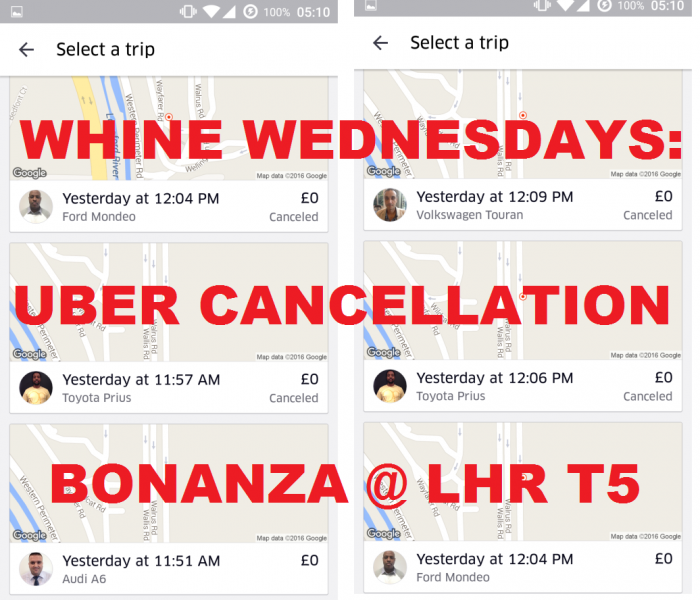 This doesn’t change the fact that Uber is starting to have taxi driver-like behavior among some of its drivers like what I just experienced in London on Tuesday when trying to get Uber from LHR Terminal 5.

Uber didn’t use to have a designated pick up are from London Heathrow T5. When I used the service from T5 to the terrible Sheraton hotel last year, the driver contacted me and asked to meet at the departures level from where he would pick me up.

This has now changed, however. When you arrange a pick up there is designated area that Uber has for Terminal 5 that is the Short Term Parking Level 1 F Row. Couldn’t be clearer, right? No!

I wasted twenty minutes of my time on Tuesday trying to get a driver to pick me up. The first driver canceled after few minutes. The next attempt bounced from driver to driver and then the third or fourth driver didn’t move his car for several minutes and that forced me to cancel the trip. I repeated this many times before decided to take the tube instead.

You may wonder why the driver would accept the pick up but then not move his/her can and just wait for the rider to cancel?

Uber uses driver cancellations as one of the performance measurements. If the number of cancellations is too high, they may be kicked out altogether. This doesn’t apply when the rider cancels even when the driver makes no intentions to do the pick up.

As a matter of fact, I had this exact same thing happening in Bali last week. I tried to get Uber to pick me up from the Stones hotel and that turned out to be a challenge. At one point, I let the app run and see how long does it take for a non-driving Uber driver to cancel the trip. I canceled after the car didn’t move for more than 15 minutes.

Some drivers also try to call and that never works because the number that I have on file with Uber is actually Google Voice.

Why doesn’t Uber allow communucation via text messages inside of their app? One would think that this shouldn’t be that difficult to implement especially if some of the drivers have challenges understanding the pick up location such as the one dictated by Uber for T5.

Uber should institute better quality control over its drivers. It shouldn’t be too difficult for them to figure out that something is wrong when the driver doesn’t move for 5+ minutes after they have accepted the pick up.