When I was reading New York Times mobile edition during a flight yesterday morning, it had an interesting article about new proposed agreement to reduce carbon dioxide emissions by the airlines. 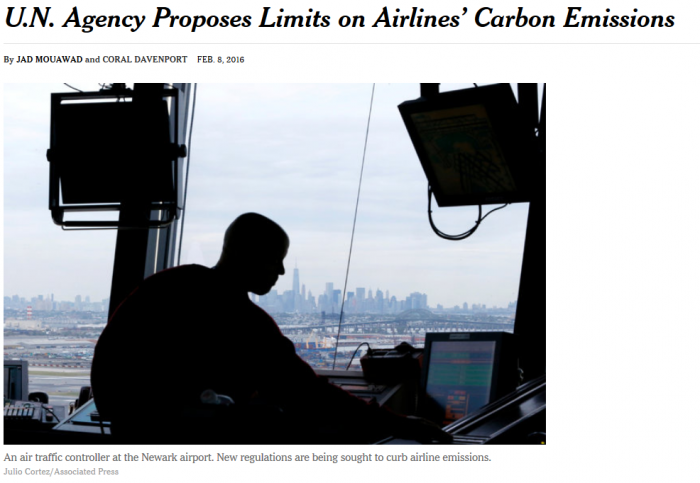 The airlines currently account roughly 2% of all global emissions, but this is estimated to triple by the 2050 due to growth in air travel. The ICAO proposal would only require airlines’ to cut emissions by 4% on new airline deliveries in 2028 compared to 2015.

You can access the New York Times article here of which below is an excerpt:

The proposed rules signaled the first time that the aviation sector had been given emissions standards, just as cars and commercial trucks now have.

The new standards would require a 4 percent reduction in fuel consumption of new aircraft starting in 2028 compared with 2015 deliveries. They also set new limits for airplanes in production that are delivered after 2023. Depending on the size of the aircraft, actual reductions would be from zero to 11 percent, with a bigger emphasis on larger commercial airplanes, according to analysts with the International Council on Clean Transportation.

Before they become binding, the new standards must be formally adopted by the civil aviation council of 36 member states, in June this year, and then endorsed by the council’s assembly in October. They would then need to be enacted by each member state in its national legislation or regulation, although countries have the option to adopt even stricter restrictions on emissions.

Very small but vocal minority still claims that the human caused climate change is a hoax, although the planet keeps getting warmer and the arctic ice keeps melting.

The proposed 4% reduction on carbon emissions is not a lot considering that the air travel keeps growing fast and its share of total emissions expands. I wish that there would be substitute for fossil fuels.