Starwood made an announcement (read more here) in April, 2014, that by the end of that year none of the hotels in chain would produce shark fin in any form. Unfortunately this appears not to be the case. 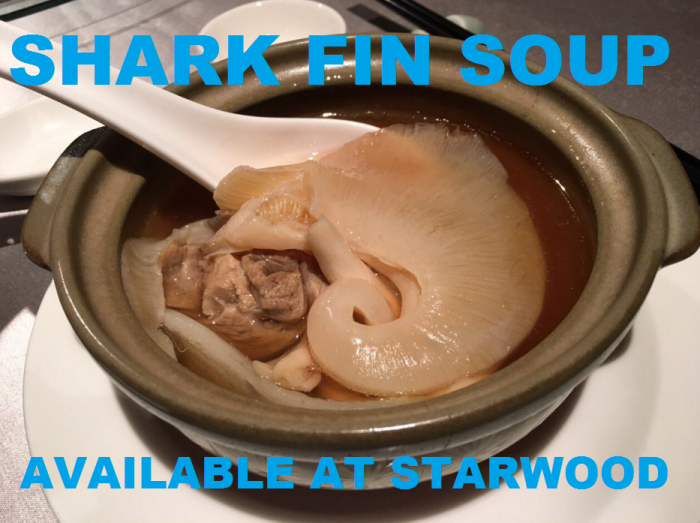 A LoyaltyLobby reader tweeted a photo (access the Tweet here) that his friend had taken at Chinese New Year dinner at the Sheraton Grande hotel in Taipei that had been serving shark fin soup.

Here’s email that the reader sent after I requested more information:

According to my friend, this is the sequence of events.

His group of friends made a reservation at the hotel before CNY for the dinner.

He made the trip down to confirm the menu. Inside the menu, the option of shark fin was offered. He did not choose that option to be included inside the menu. According to the revamped menu without shark fin, it is not the cheap menu, as it has fish maw, lobster, scallops and abalone which are the expensive dishes.

On the day, before serving the food, he saw the option of shark fin again on the menu. He requested once again for shark fin to be removed. During the dinner, Shark Fin was served to the table as showed by the picture on twitter.

He asked me to translate his experience and he confirmed with me, that shark fin was on the menu.

We wrote on SPG facebook page and tripadvisor on monday night after the whole experience.

Yesterday, the hotel called my friend to apologise. The hotel served the dish to the wrong table. The hotel also stated that shark fin is available only upon request (differs from my friend’s experience, he did confirm with me that Shark Fin was easily available on the menu). My friend did not take down the name and position of the person who called.

This morning, i received a reply from SPG that Sheraton Taipei did serve Shark Fin during CNY and they are sorry for the incident. I am not happy with the answers and requested for more information on the compliance process of the hotel chains. I suspect that this restaurant may not be the only one. It could have served shark fin before this complaint.

This is the sequence of events and now, awaiting for more information from SPG side.

Here’s an excerpt what Starwood promised back in 2014:

As part of its ongoing commitment to sustainability, Starwood Hotels & Resorts Worldwide, Inc. (NYSE:HOT) today announced that, beginning July 2014, it will no longer procure shark fin in any of its nearly 1,200 hotels or 1,300 restaurants around the world. The company has committed to completely eliminating the consumption of shark fin, without exception, in all restaurants and food and beverage services across its global portfolio by year-end. Starwood is the first global hotel operator to take this strong stand and commit to banning the ingredient across its entire portfolio.

Since first removing shark fin from its public menus in 2012, Starwood has worked diligently with hotel owners and partners around the world to institute an outright ban on the dish, and has already reduced overall purchases of shark fin within the company’s portfolio by 79% in the past two years.

In addition to prohibiting the procurement and consumption of shark fin, Starwood has also banned whale and sea turtle, globally, from all of its menus. The exclusion of threatened seafood species from the company’s food and beverage venues is an important component of Starwood’s Sustainable Food & Beverage Policy. Initially published in 2012, the “Eat Local, Think Global” program is a collection of principles that guides sustainable food and beverage sourcing, production, consumption and disposal within and across Starwood properties worldwide.

Seems that the shark fin soup is still available at least at the Sheraton Grande Taipei and likely with other Starwood hotels in the region. This just proves how little control Starwood has over the hotels that are operating under its flag.

Killing shark for their fin and throwing the bodies back to the ocean to die is truly cruel. This only to use the fin to make a soup for special occasion?

Have you seen shark fin soup still served at Starwood hotels in the Asia Pacific and especially at Greater China hotels?