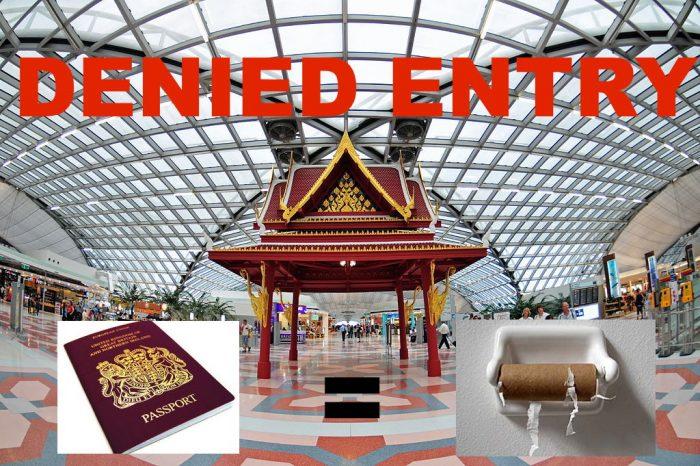 Sometimes you read something and think to yourself it can’t be true. This was one of such instances as I couldn’t imagine someone being that dumb.

British tabloid news The Daily Star (access here) reported about the case that resulted in the immediate return of the young woman on the carrier she arrived by (Emirates).

Dozy Faye Wilson, 28, had to explain to Thai immigration officials that she had used “two or three” pages of her passport to wipe herself on a drunken night out.

The “stupid” hairdresser, from the Lake District, said she felt “like a criminal” after she was quickly turned around at the airport in Thailand and flown back to Glasgow. She had planned on spending a month in the Asian country before working for a year in Australia.

“I just said that I had lost the pages because I was too embarrassed to explain the real reason. “Before I could explain more, they had deported me back to Dubai and then to Glasgow and confiscated my documents.”

Faye had her passport taken off her and was escorted back to the UK with a security guard.

So far so good, problems with passports happen all the time. In fact I had the front page of one of my passports partly ripped off by check-in staff not to long ago but anyway…

I can’t believe that they sent a security officer from Dubai to Glasgow just for such a case. Not sure what happened here but this doesn’t make sense.

Now we are curious. What did happen to this passport?

She said she remembers little of the night out which caused her so much trouble.

She said: “We were walking from one bar to the next and we must have been desperate for a wee and obviously didn’t have any toilet roll. “We decided it would be a good idea to use my passport, which is obviously really stupid.

“It was maybe two or three pages. “I was a bit drunk so didn’t even think about the consequences.”

Faye was forced to return home and apply for an emergency passport before flying back out to meet her friend she left behind in Thailand.

Unbelievable. In my opinion there should be a rule that such people aren’t allowed to receive a replacement passport for at least 6 months in cases of complete negligence. I hope (and firmly believe) she had to pay a whole new round trip ticket back to Thailand.

Some people should never be allowed to leave their home country to avoid embarrassing themselves and their country. What I don’t get is why would you even come forward with such a story and make a complete idiot of yourself in national and international media?