A beautiful pool, the perfect beach, a fantastic dinner… more and more guests that are fed up having these experiences ruined by screaming and misbehaving children are now aiming at Adult Only Hotels. 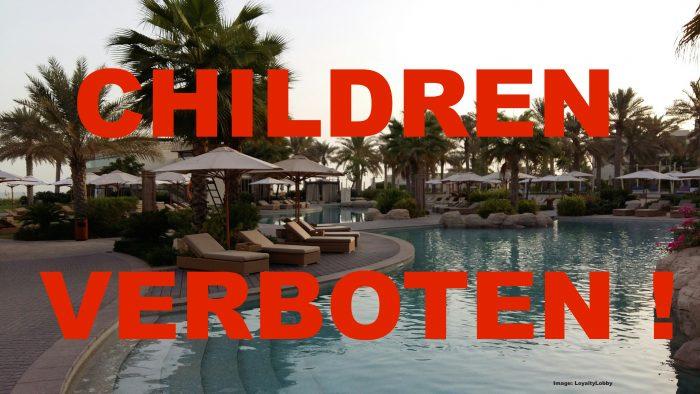 While such properties do not protect you against obnoxious, ignorant adults it certainly eliminates the child factor straight away.

At one point any of us have reached the point where we looked at a scene of a child that was acting up and thought to ourselves ‘Really? Here??’. More often than not it’s not just children being children but also ignorant parents who let their kids roam around pester other guests while enjoying their own quiet time.

The Wall Street Journal (access here) had an interesting piece this week that identified Germans as the group of travelers most annoyed by these situations.

To truly decompress, vacationers from the country are increasingly looking for a specific, relaxing hotel type—one that has nothing to do with traditional amenities. Rather, they are seeking out properties that ban children, along with their crying, tantrums and other distractions synonymous with the terrible twos…

“One single vivacious child can completely ruin your holiday,” says René Weiss, a childless 48-old German who has frequented such establishments with his wife in recent years. Although the hotels can’t guarantee a pin-drop noise level, post-pubescent guests can dine and sunbathe without children splashing and yelling.

Mr. Weiss has traveled to the Caribbean for the calm company of his coevals. “I can relax and read without a horde of children running through the hotel lobby… or some child doing a cannonball into the hotel pool,” he says.

Germans’ demand for more child-free hotels has been seen and heard.

I’m not surprised about the commercial success of such hotels. Some argue that you push away a large group of customers by excluding certain demographics from your business. I always disagreed with that based on the fact that a business can’t serve the entire community, there is a cap of how many customers you can handle without starting to lack quality. I see nothing wrong with limiting your services and products to a specific circle.

One of the biggest problems with young hotel guests, say child shunners, is parents. Many German mothers and fathers take a hands-off approach that scandalizes calm-seekers.

Hans-Joachim Spröde, a 54-year-old detective and father of one daughter, says he is shocked by how younger German parents let their children “run wild” in hotels, restaurants and other public places.

“Children are a disturbance in spa and bathing areas, which are particularly sensitive to noise, or in restaurants where children are squawking.” says Mr. Spröde, who with his partner Ms. Denz, recently enjoyed a stay in a child-free hotel in Bavaria.

Ms. Denz recalls a breakfast in a four-star hotel in Italy ruined by a six-year-old German boy running around while his parents enjoyed their salmon.

I totally agree with that and it’s not only in hotels but public places and restaurants in general. I don’t know at what point parents became completely oblivious about the whereabouts and behavior of their kids.

Petra and Gunter Bonn, a couple from Frankfurt, loved their stay at a luxurious adults-only resort in Punta Cana, Dominican Republic. The resort’s empty beaches, she says, were only marred by “loud Americans.”

That is indeed a problem. I rest my case. 🙂

I find the rise of adult only hotels a great solution. But apart from that many regular hotels and resorts nowadays have adult pools. Now beware, in some cases that means you can bathe topless but in general it means no children permitted on that pool.

The picture featured here was taken in a serene moment (at 6:30am) at the Park Hyatt Abu Dhabi. By 11am the latest this pool transformed into mayhem with squealing children everywhere. And then some parent started to facetime with his ipad in a voice that could sell you anything on the weekly market. Siesta time!