Todays edition of Award Success brings us once again to Gol Smiles where I was able to piece together a very affordable ticket from Bangkok to Ulan Baatar, Mongolia. 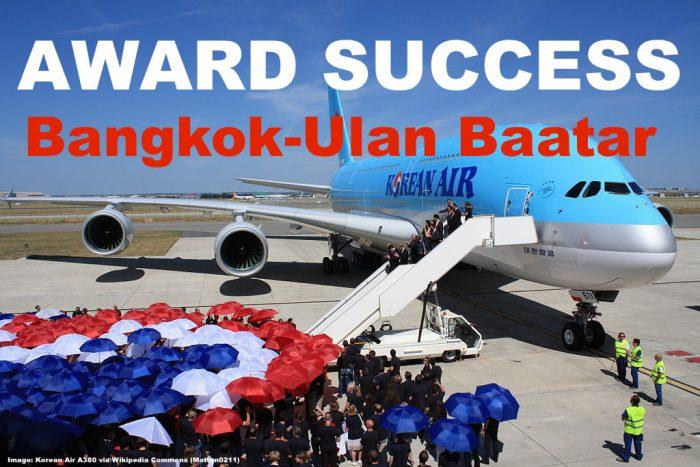 When I agreed to visit my friend for a weekend I had no idea how expensive it is to go to Ulan Baatar. Thankfully I still had a few Gol Smiles leftover to utilize Korean Air on that route.

Travel became such a routine that I caught myself becoming very careless scheduling trips without even considering that a place could be quite remote and therefore expensive to get to.

Ulan Baatar is certainly no exception. Once I looked on Expedia (usually my first stop to check the situation of airfares on a certain route) I almost got a heart attack as the lowest price was about 1,300$ round trip in economy and with horrible layovers. On top of that there are only very limited airlines that fly there in the first place that include MIAT Mongolian, Air China, Korean Air and Turkish Airlines.

To give you an impression here is the pricing of a Korean Air roundtrip in Economy (I don’t really buy Business Class for such short flights unless it’s a really good deal). 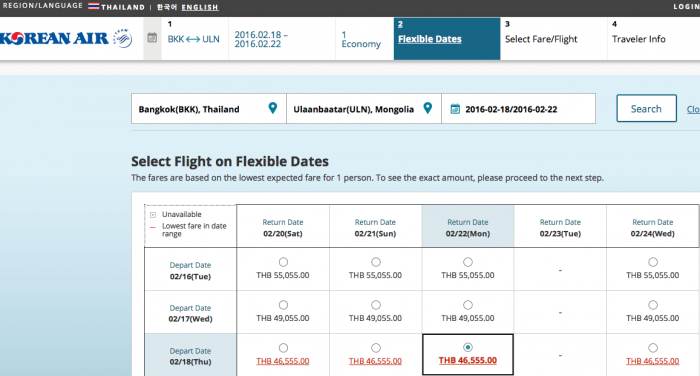 As you can see, 46,500 THB which is approximately 1450 USD isn’t exactly pocket change for a connection within Asia.

I remembered that Gol Smiles now has Korean Air as a redemption partner and tried my luck there. Indeed I found available seats even though there were a few obstacles.

BKK-ICN-ULN doesn’t seem to be a valid routing when redeeming through Smiles. It would have been possible from Hong Kong for 15,000 Smiles in Economy or 32,500 Smiles in Business Class but that would have required me to go to HK first which proved to be impossible due to the Chinese New Year week (extremely expensive fares and no mileage tickets on BKK-HKG until the 19th FEB). I decided to break it down and bite the bitter apple to redeem 2 ticket on the one way plus redeeming Ulan Baatar-Seoul-Shanghai on the return which came back as valid.

Here is what I booked:

In total I used 56,500 GOL Smiles as well as 731 BRL / 180 USD in Taxes/Fees/Milage Supplements for Cash&Points. I think I paid about 500$ for these 56k during various triple miles promotions we wrote about. The fact that these miles were distributed on two separate accounts made them even less valuable at the time.

On top of that I was able to get the A380 out of BKK to ICN and also scheduled a 24 hour layover in Seoul on both ways. I’m very satisfied with this solution and was happy that I still had the Smiles banked.

I ran into problems with these GOL Smiles before because it appears they restrict routings on Qatar Airways Business Class in some ways. First Class isn’t available at all anymore. This is the second time I’m redeeming for Korean Airlines and have to say that it can make sense looking at this option from time to time.

I think I’ll buy some more Smiles should there be another promotion that is worthwhile. Until then I let this Clube Smiles monthly subscription run that adds 5000 Smiles to the account every month for 150 BRL.