Travel can still be exciting. At least when you fly with China’s Hainan Airlines that accommodated two female travellers at a kinky S&M Fetish hotel following a cancellation at Chongqing airport this week.

After Hainan Airlines followed their obligation to provide the passengers with hotel vouchers the two ladies were aghast when then saw what kind of equipment was in their room.

First and foremost I have to give Hainan Airlines credit for properly caring for their passengers because that’s by far not a given in mainland China, especially on domestic travel.

I read about the case over at the Shanghaiist (access here) where details of the trip were published.

Two Chinese women found themselves spending the night in an psycho-erotic kink-mad “Fifty Shades of Grey” – esque hotel room that was accidentally gifted by an airline following a flight cancellation.

After a flight from Chongqing to Hangzhou was cancelled on Sunday evening due to weather conditions, Hainan Airlines naturally had accommodation arranged for the two flyers. Said accommodation was revealed to feature, among other things, a dominatrix-friendly “sex chair” and handcuffs. The guests generously shared photos and quips on Weibo, joking about the accommodation being “a small Valentine surprise” for “two single unmarried girls” — comments that have since been deleted for no imaginable reason. 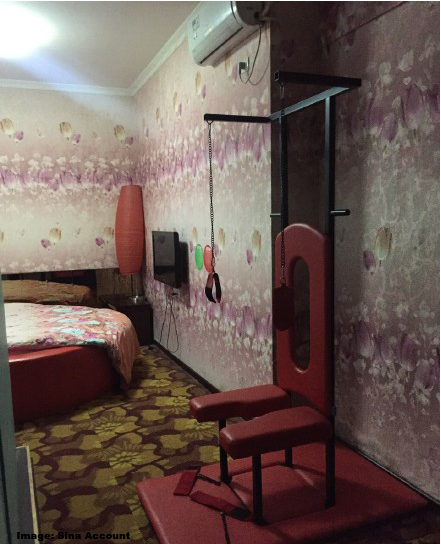 While the color scheme of the room, especially the wallpaper appears to be a bit antique, the furniture speaks a clear language.

According to Hangzhou Xiaoshan International Airport, the airlines are specifically responsible for providing accommodation for passengers in case of flight cancellations, reports Sina.

However, a spokesman from Hainan Airlines claimed no knowledge of the contents of the room and washed the company’s hands of it. …

“Well I know where my girlfriend and I are going next year,” joked one netizen.

“It even comes with exercise equipment, not bad,” commented another.

At least the two girls had humor and found it funny as it was evident by their posts on chinese social media site Weibo.

I guess that in a situation where you need to procure 150 hotel rooms sometimes you just look in a registry and call random hotel to ask if they have rooms available. Ideally airlines have local partner hotels but again, this is China and who knows Hainan has to deal with such a matter in Chongqing.

So one way or the other the two ladies who traveled together ended up at the hotel in question where they were assigned this ‘theme’ room. We don’t know the name of the hotel and whether they offer standard rooms as well that do not include such equipment as shown. In this case one could say that a special upgrade has been received. Diamond treatment!