The General Manager of Atlanta Hartsfield Airport has threatened to replace the TSA Checkpoints with private screeners after the situation became unbearable with wait times occasionally exceeding 1.5 hours. 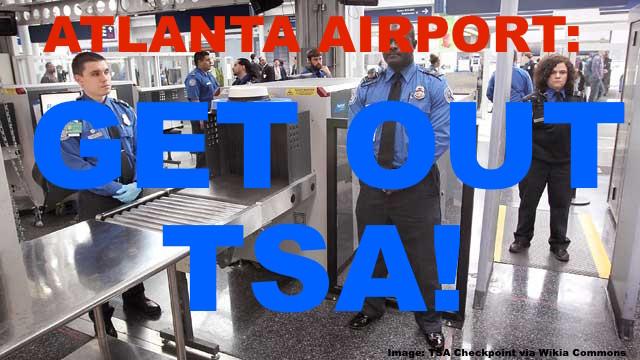 Atlanta Airport management has given the TSA 60 days written notice to get their act together and rectify the unacceptable situation or they will begin the process to replace TSA Checkpoints.

Several friends of mine who travel frequently through Atlanta posted pictures and complaints about the wait times including for TSA PreCheck on their Facebook the past few months. I’ve never traveled through Atlanta as far as I can remember so I didn’t think much of it, however this news came as a surprise.

The Business Insider (access here) reported about the situation and included some links, including the letter that was sent.

Atlanta’s Hartsfield-Jackson International Airport, the world’s busiest airport, has issued a warning to the US Transportation Safety Administration to get its act together or be replaced.

According to a letter from Hartsfield-Jackson general manager Miguel Southwell to TSA administrator Peter Neffenger, the airport’s security screening checkpoints are woefully understaffed with no sign of significant improvement in sight.

The letter, obtained from a source by Aaron Diamant of Atlanta’s WSB-TV, was dated February 12. The TSA confirmed to Business Insider that it had received the letter and was evaluating it.

In the letter, Southwell says the chronic staffing shortages are leading passengers to wait over half an hour at the TSA checkpoints. If things don’t change, the airport will bring in private security personnel under the TSA’s Screening Partnership Program, he warns.

Here is the letter sent to the TSA Administrator obtained by local news media WSB TV:

The letter was cc’d to the political representatives of GA including Senators Johnny Isakson and David Perdue.

“Several times throughout the day from May to October 2015, wait times (at TSA checkpoints) exceeding 35 minutes were not uncommon,” Southwell wrote. “This is unacceptable as reflected in the customer service surveys of our hub carrier Delta Air Lines.”

I checked on the recent post of a friend of mine who (without PreCheck) waited 72 Minutes from arriving at the checkpoint to clearing it. Almost all flights were delayed that day.

The TSA Blog (see here) writes about the Screening Partnership Program (Opt Out – all pun intended):

Any commercial airport can apply to TSA’s Screening Partnership Program (SPP), which has been around since the inception of TSA.  After approval from TSA and a competitive bidding process, SPP allows airports to transition to private screeners while maintaining TSA oversight and the corresponding increased level of security implemented since 9/11.

So… if an airport applies and is accepted into the SPP program, they receive the same screening from a private company instead of TSA officers. That’s the only difference. All commercial airports are regulated by TSA whether the actual screening is performed by TSA or private companies. So TSA’s policies – including advanced imaging technology and pat downs – are in place at all domestic airports.

What does the TSA say about all this?

“We recognize that the issues raised in the letter are a concern, not just in Atlanta, which is fueled primarily by the rapid growth in travel volume combined with a renewed focus on our security mission,” Mike England, a spokesman for the TSA, wrote in an email to Business Insider. “Resolving these issues and achieving our common goal calls for a collaborative approach with our industry partners. While we are working on better solutions, we believe the public will support our vital mission of ensuring safe air transportation.”

Bla, Bla, Bla. Hot air and nothing else as it could be expected. The TSA must be one of the most inefficient government agencies of the United States and given that their performance isn’t that stellar as well (TSA checkpoints missed between 75-95% of all pre-arranged contraband during tests) this appears a huge waste of money. Mind you, with each ticket you pay a security surcharge, not sure if it’s still called the Sep 11th Security Fee (I haven’t purchased a ticket involving U.S. Travel for a while).

If Atlanta, the worlds most busiest airport is following through with this and the replacement of TSA is successful other U.S. airports might follow them. It can only get better!