During the past couple months of using the Freccia Alata Plus status from Alitalia both me and John had a variety of mixed experiences when it came to recognition of the status by other Skyteam members.

A number of airlines did not display the Skyteam Elite Plus Status because the Alitalia Frequent Flyer Number printed on the card doesn’t pull up any record.

We ran into this problem repeatedly ourselves with

It’s entirely possible that some of our readers had bad experiences with other airlines as well (please do let us know!).

I experienced the same issue with Korean Air once more this past week and decided to compare old boarding passes and also consult the ticketing desk in Seoul. With a result! 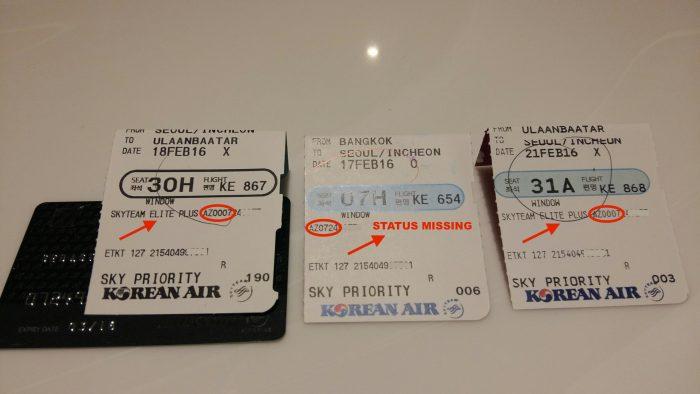 The membership number on my card begins with 0724- and if this is entered it comes back as blank (the middle boarding pass only shows Sky Priority because it was booked in Business Class). The check-in staff in Bangkok didn’t know how to fix it and since it was an award ticket I didn’t collect miles anyway, it wouldn’t have given me any advantage since I was already in Business.

On the other segments however I purchased Economy Class and to get the lounge access I was determined to get this resolved. The agent in Seoul said they are well aware of the problems with the Alitalia numbers and it can be resolved by adding a double zero (00) in front of the actual number.

This worked both at the airport and during online check-in. For Korean Air that is – not sure about the other partners but I wanted to let you guys know in case you encounter similar issues.

I was able to get benefits by presenting the card in all cases but it was almost always a headache and I don’t like it when things don’t appear on the boarding pass especially when priority baggage is involved. The little yellow flag usually doesn’t mean a thing as the code contains the Sky Priority information.

Let us know if you had any trouble or success with this workaround!

Airfare of the Day [Business Class] ALITALIA Barcelona to New York from 1,275 €

Airfare of the Day [Business Class] ALITALIA Barcelona to Chicago from 1,275€