This week the Compensation Clinic has a touchdown with Thai Airways where yours truly had a quite unpleasant experience on a recent one way ticket from Tokyo to Bangkok in Royal First Class. 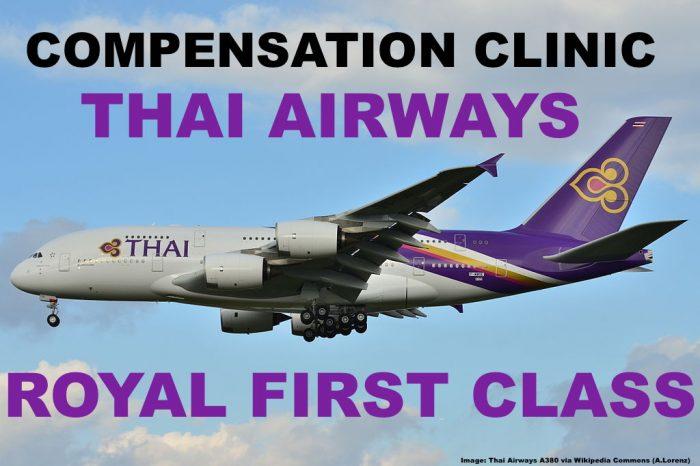 There were multiple issues with this flight of which the most prevalent were a cold (and later overcooked) pre-ordered meal and another passenger taking their Economy Class child into the First Class cabin.

Thai Airways First Class was never really First Class but it was pretty good for the price it’s usually available at. Unfortunately like the whole airline itself, the First Class product lives and falls with the crew on board at any given day. This flight was pretty bad once again.

Here is a rundown (letter I sent to Thai Airways Customer Relations):

I was a passenger on Thai Airways Flight TG 677 (JAN xth) in First Class from Tokyo NRT to BKK (Booking Ref xxxxxx). Unfortunately I have to contact you in regards to a multitude of incidents during this journey.
During check-in in Tokyo I was told that a representative would escort me to the lounge however after the security check the lady had disappeared. I was also not picked up at the First Class Lounge when it was departure time either. This is no big deal but why offer it in the first place if it can’t be followed through with? The passenger can better make their way to the gate at their own pace rather than wait for an escort that never shows.
On board: In the middle seat of the first row 1D was a lady who had her children booked in Economy Class and that were led up by the nanny on a constant basis without interference of the crew. The lady had the toddler with her 2/3 of the flight which created a noise disturbance in the cabin to the point that I complained about it to the crew and suggested that passengers stay in their booked cabin. Nothing was done and the child was even served food and beverages by the crew. I took a picture of the situation and can forward it to you if you want (I have not included it with this email for privacy purposes).
Furthermore I pre-ordered the dish ‘Lobster Thermidor’ for this flight. When I was served the meal the lobster was cold. I notified the crew about this. When I got the plate back it had been reheated to the point that all side dishes were overcooked and mushy. In other words the whole dish was inedible.
I consider this Thai Royal First Class flight to be everything but a First Class experience. It was an embarrassment. I already mentioned it in the after flight survey I received from Thai but haven’t gotten any response in regards to this. Your Feedback Form on the website is defective and produces an error message.
The developments are sad in particular because Thai Airways commercial performance has not been very great in the recent time and situations like these will certainly not contribute to improve it.
Please kindly investigate the matter and refer back to me in due time.

Thai Airways took about a week time for their investigation of the matter and replied:

Further to our previous response, we are writing regarding your unpleasant experiences when traveling TG677 from Narita to Bangkok.

We are sorry to note there was a lapse in good service due to lack of escort service upon check-in at Narita Airport, and that you were disturbed by young passenger in Business Class visiting her parents in Royal First Class cabin. Please accept our deep apologies for the overall inconvenience and less privacy caused to you on this flight. Although, to a large extent, the matter relies on passenger’s co-operation, all our crew are instructed to attend to all such problems, with great tact and all possible means. We wish to assure you of our concern that we have reported your feedback to our In-Flight Services Department so that they shall remind our cabin crew to take more constructive action in such circumstances to ensure that all passengers enjoyed a relaxed and comfortable cabin environment, particularly in First Class Service.

Furthermore, your comment regarding the quality of our Lobster Thermidor has been brought to the attention of our Catering Department and In-Flight Service Department for appropriate measures to be taken, in order to maintain the high quality standard of THAI cuisine, not only in presentation but also in taste before leaving their kitchen.

In recognition that such incidents marred your trip, we would respectfully ask you to accept 10,000 complimentary miles to your Royal Orchid Plus account on exceptional goodwill gesture as a token of our sincere apologies for your dissatisfaction. We hope to have your kind acceptance of our offer, and awaiting your reply for further actions.

To me this is a bunch of nonsense. This matter doesn’t rely on the passengers cooperation. The passengers takes someone who hasn’t paid for First Class into the cabin. If I were to sit down in First or Business Class with an Economy Ticket and refuse to go back I will be arrested upon landing and rightfully so. Apart from this there wasn’t even an attempt made to notify the lady to bring her kids back to the cabin she booked for them.

10,000 Miles… well that’s probably standard compensation but I declined the Thai Airways Miles since I collect with Singapore Airlines KrisFlyer. I requested the miles be credited there (TG can do this and has done so in the past) and alternatively issue me a voucher/MCO for a future flight purchase.

Noisy children in premium cabins who have paid for their tickets is something nobody can really complain about unless the parents are ignorant and do nothing to shut them up in a reasonable manner.

This is going above and beyond that. It just added fuel to the fire that they screwed up the lobster. You couldn’t really eat anything from the regular on board Menu as it’s by know well established that Thai Airways food options are ridiculous and not First Class (or Business Class) standard unless you are on real longhaul flights… and even then!

Wynn Las Vegas Resorts Are Shutting Down Their Buffet Again, Other...

Las Vegas has been on the forefront of reopening it's economy to the public, first the casinos and then the dining options including -...