In December I wrote in our Whine Wednesday section about the crowded security lines at Korea’s Incheon International Airport (ICN). I was back 4 times since and it has gotten even worse! 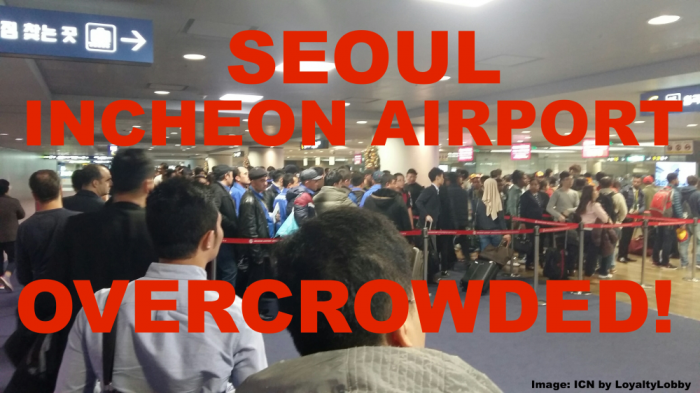 From what I could see the problem is short staffing paired with poor planning and not primarily too many passengers but the airport and immigration authorities seem to care less about wait times.

Arriving on Korean Air for example Incheon has two immigration areas at that part of the Terminal that (if adequately staffed) are more than able to handle a good number of arriving international passengers. This staffing appears to become a constant problem. During my last 4 arrivals on different parts in the day only one of these two Immigration lines areas has been in use with the other one closed.

The images I took yesterday show the situation after just 3 flights arrived more or less at the same time. The crowd went beyond the line all the way down the aisle and I’d estimate about 600 people.

For this amount of passengers, FOUR counters were open to deal with immigration formalities. Another one was opened briefly but closed 10 minutes later. South Korea collects biometric data (fingerprints and photo) which slows down the process even more. That and my usual pet peeve of people who don’t fill out their paperwork properly. 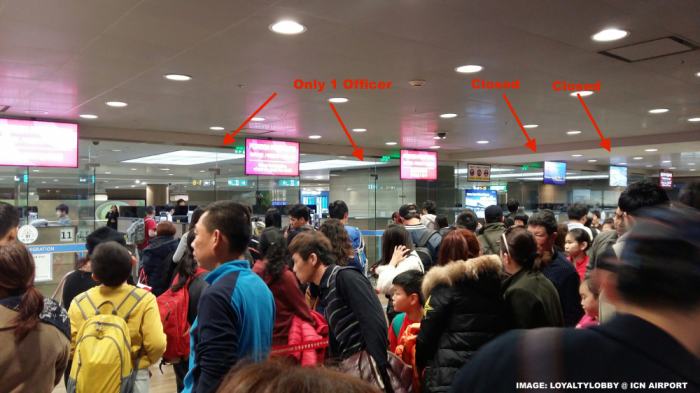 The wait time was 1:20h just for immigration. That’s about as bad as the U.S. used to be back in the day. And this is clearly a problem that could be avoided by getting more staff on the shift. I asked for the supervisor to complain about the situation and they presented some grandfather to me who didn’t speak a word of English.

In early January Incheon saw a record number of passengers one day that led to a collapse of the baggage system leaving thousands of bags stuck and behind without being reconciled with the passengers for days.

Chosun reported about it here.

About 160 flights were delayed for up to five hours due to the breakdown of the system, and some aircraft simply took off without passengers’ luggage. Hundreds of passengers were still unable to claim their baggage by Monday afternoon.

“Aircraft took off without hundreds or thousands of pieces of baggage per airline,” an airline staffer said.

An Airports Corporation spokesman said the airport saw a record daily number of some 176,400 passengers on Sunday, and that led to some glitches in one or two of the 88-km long conveyor belt lines. “The glitches seemed to cause the entire baggage handling system to break down.” …

But experts point out that the overload was only a matter of time. The airport is designed for up to 44 million passengers per year but last year it was used by 49.2 million. …

Others point out that staff discipline at the airport has become lax because corporation presidents have been coming and going through the revolving doors. They appear to have used the job as a springboard into politics, and the frequent replacements have caused lax discipline among staff.

Thats a compliment. Staff attitude at Incheon (I never ever found the service in Korea to be exceptionally good or competent to begin with) is a disgrace and no comparison to Japan where everything runs smooth and courteous.

Incheon Airport has a website with a complaint section if you feel compelled to leave one (access here).

It appears that Korean Air and Asiana as the home carriers as well as all the other airlines are pumping so much traffic through Incheon that the airport can’t cope with the numbers anymore. That paired with inadequate staffing and lackluster management is a recipe for disaster.

The security checkpoint in the departure hall is a constant disaster as well and not an inch better anymore than your average airport in mainland China.

Las Vegas Is Going Dark: All of Nevada’s Hotel-Casinos & Nonessential Businesses Are Closed Until Further Notice