The ICAO announced that from 1st of April 2015 all shipments of Lithium Ion batteries will be banned from all passenger planes following a series of incidents including on board fires. 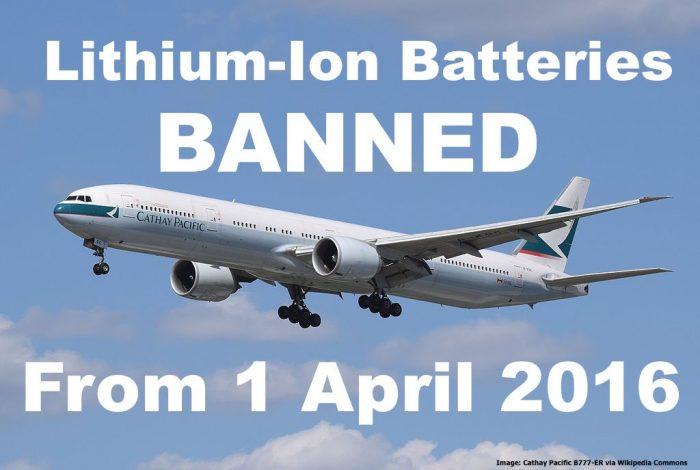 Personal items that contain Lithium-Ion batteries are still permitted to be taken on the flight though many airlines have their own restrictions such as they are not allowed in checked baggage.

There have been a number of cases that were traced back to these batteries as the culprit for dangerous situations including fires causing substantial damage.

The governing body for aviation the International Civil Aviation Organization (ICAO) decided enough is enough and put a ban into place that forbids the shipment of Lithium-Ion batteries as cargo on passenger planes starting April 1st 2016.

The Guardian (access here) reported on it as well.

The International Civil Aviation Organization’s 36-state governing council said the prohibition would be in effect as of 1 April and remain in force until a new fire-resistant packaging standard was designed to transport the batteries.

Lithium-ion batteries, which are rechargeable, can still be transported on cargo planes.

The ban would be mandatory for states that are members of the ICAO. Shipping lithium-metal batteries – which are not rechargeable – was already banned on planes.

My first thought about this was fine, but this requires shippers to be honest about the contents of their boxes. Turns out this the concern of some at the ICAO as well.

But one dangerous goods expert familiar with ICAO’s thinking questioned whether a ban on lithium-ion batteries would make passenger planes safer. He said instances of such battery fires usually involved deliberate mislabelling by shippers.

“When the industry banned the shipment of lithium-metal batteries, we saw instances of them being passed off as lithium ion batteries,” said the expert, who was not authorized to speak publicly. “Those people who are not complying now won’t comply with a prohibition.”

Obviously you can’t open any box to check for the actual content. That would be a logistical nightmare and probably the maximum would be a visual inspection that won’t yield much in terms of distinguishing different terms of batteries from each other.

Back in December we wrote about the ban Singapore Airlines put out on hoverboards and other devices with lithium ion batteries (access here) and these are expected to stay in effect as well.

If you are not sure about the regulations of your individual carrier you should consult the website or reservation office of your airline what articles are permitted on board and which not.