New York Times run a story yesterday about 81 year old lawyer that is suing El Al due to sexism. 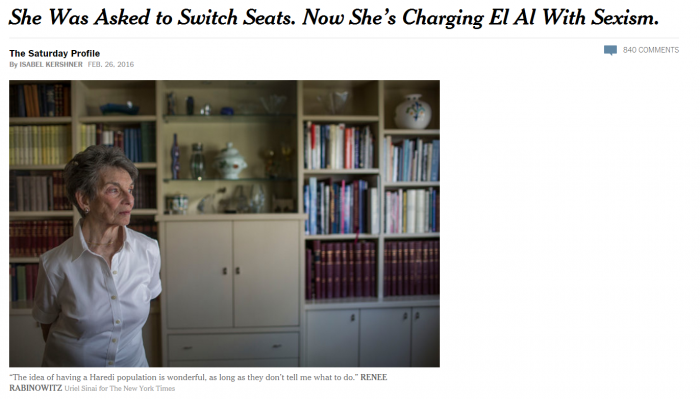 She was asked to move her seat on an El Al flight from Newark to Tel Aviv due to ultra-Orthodox male passenger.

You can access this article on New York Times website here of which below is an excerpt:

RENEE RABINOWITZ is a sharp-witted retired lawyer with a Ph.D. in educational psychology, who escaped the Nazis in Europe as a child. Now she is about to become a test case in the battle over religion and gender in Israel’s public spaces — and the skies above — as the plaintiff in a lawsuit accusing El Al, the national airline, of discrimination.

Ms. Rabinowitz was comfortably settled into her aisle seat in the business-class section on El Al Flight 028 from Newark to Tel Aviv in December when, as she put it, “this rather distinguished-looking man in Hasidic or Haredi garb, I’d guess around 50 or so, shows up.”

The man was assigned the window seat in her row. But, like many ultra-Orthodox male passengers, he did not want to sit next to a woman, seeing even inadvertent contact with the opposite sex as verboten under the strictest interpretation of Jewish law. Soon, Ms. Rabinowitz said, a flight attendant offered her a “better” seat, up front, closer to first class.

The lady states that she doesn’t mind these ultra-Orthodox (finds them wonderful) as long as they are not telling her what she can do.

In my opinion this applies to all religions. Anyone is free to do or believe in whatever they want to as long as they are not telling others what they are allowed to do.

These Haredi male passengers should book two or three seats for themselves if they want to ensure that there are no female passengers sitting next to them. Problem solved.