The UK press broke an interesting story on Friday regarding a bed bug infested 747 that continued flying (management decision) before it was taken off for deep cleaning & disinfected. 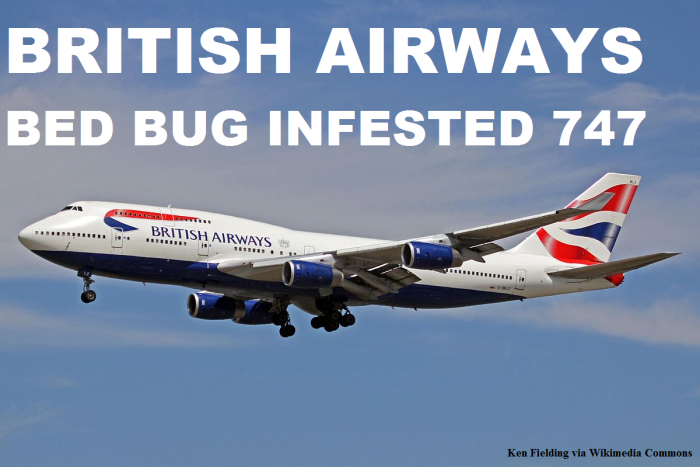 Bed bugs are unfortunately not rare and can often be founded even from the poshest of hotels.

Here’s an excerpt from the Telegraph (access the entire piece here):

British Airways plane infested with bed bugs was allegedly kept in service despite staff knowing about the problem – a claim the airline denies.

The Sun reports that staff at the airline logged the issue after the insects were spotted – and passengers bitten – on a flight from the US to Heathrow last week. So serious was the problem that an entire row – 47 – was closed in economy class, the newspaper said.

But staff claimed that engineers did not have time to deal with the bugs and bosses decided to keep the aircraft in service. Days later another “severe” infestation was reported on the same Boeing 747 during a flight from Cape Town to Heathrow.

British Airways denied that it had allowed the plane to return to the sky after the outbreak was discovered.

Bed bug bites are not fatal but they are extremely annoying nevertheless. I had an incident few years back at Intercontinental Westlake in Hanoi that I believe were bed bug bites (read more here).

I am surprised that the British Airways didn’t take the plane off from rotation and had it deep cleaned and disinfected immediately. Knowingly flying bed bug infested plane and causing unnecessary harm for passengers is not the wisest choice.