It is now more than a year and a half since the opening of the new airport in Doha (was originally supposed to open in 2009) and you would think that all the opening issues would have been ironed out by now. Unfortunately this is not the case. 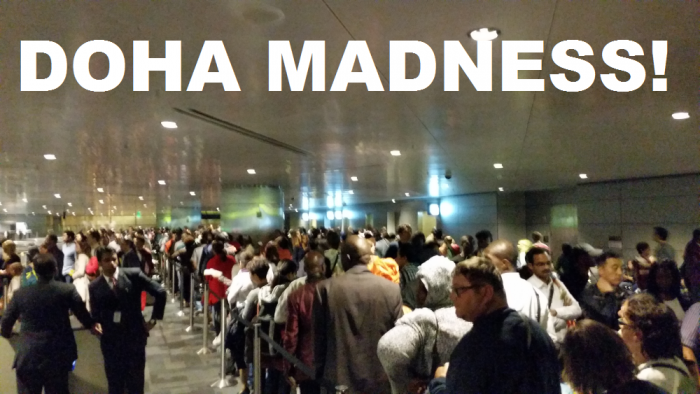 Why passengers from safe destinations such as Oslo need to go to through the transit security madness? I could swear that this has not always been the case.

The old Doha airport didn’t have any jet bridges and all the transfers to/from aircraft were done using buses that sometimes took forever. You would think that they had resolved this issue? Well. At least they send own bus for business class passengers on tarmac arrivals.

The Doha airport has two or three flight banks with one to two hour transit times. The internet is completely usable during these time periods even in the lounges.

Why Qatar Airways doesn’t have dedicated internet capacity for its lounges at the airport? You must log in to the generic airport internet that is open for all.

The internet works ok during the off hours.

The internet usually works before 11PM and then again after 12:30AM. The internet again goes down starting at 5AM until the morning flights have left. I would pay to have a working access rather than having timed out web pages…. Cannot really be that difficult to have dedicated and working internet access (even during the rush hours) for the lounges.

On my most recent transit, we must have parked at the furthest gate possible. They did have an apparent intra-terminal people mover working on test basis but you couldn’t access it. All the seats were wrapped.

The transit security actually wanted me to remove the photo that I took from the lines at the airport. Took more than 15 minutes before they were ok that it was only showing people lining up and not the actual screening facilities.

The transit screening is mostly a joke and the lines would be far longer if they would have real process going on. You don’t have to remove anything from the bags.