A passenger on an American Airlines regional flight from Chicago to Salt Lake City was bumped off his flight that had weight/balance issues. 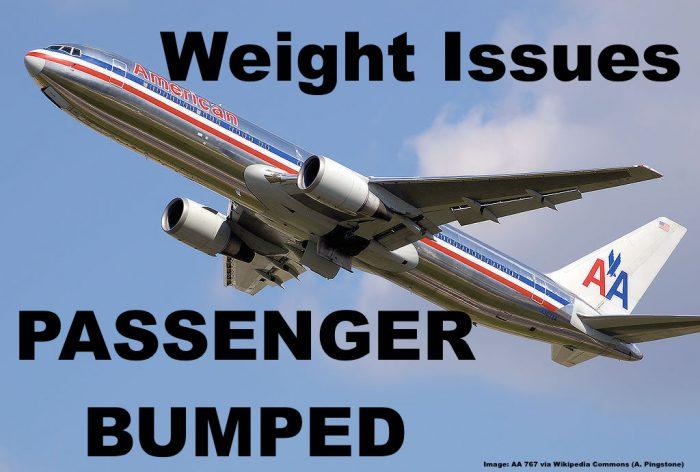 That by itself wouldn’t be an anomaly since it happens quite often but this particular passenger weighs only 175 lbs and also holds AAdvantage Platinum status.

Based on his status alone he should be among the bottom of the list of those passengers to be offloaded.

The ABC7 I-Team is investigating the case of a 175-pound man who was forcibly removed from a plane.

Experts say it happens more than you may think – people of all sizes being told they can’t go on the flight because there is too much weight on-board.

The I-Team responded to one passenger’s concerns because a flight attendant told him he was getting the boot after he was boarded and buckled in!

“I was in shock, I didn’t sleep that night, I was kinda numb all first day or two,” said Dan Nykaza, a Wilmette Dentist. Nykaza says he was blind-sided when he got forcibly bumped off his American Airlines “Envoy” regional carrier flight from O’Hare to Salt Lake City. “So I missed the entire weekend. My nephew was there, my daughter, it was sad,” Nykaza said.

Nykaza, who has “platinum status,” says he was so angry he walked away and turned down a $200 voucher. The flight wasn’t oversold.

200 USD voucher for an involuntary denied boarding is definitely far below anything the passenger is entitled to. In fact the airline would be required to up their bids in order to seek out volunteers. Should there be no volunteers in such a case then the airline staff is indeed forced to make a decision as to who to bump off the flight. In any case a Platinum passenger should not be among those who are being bumped provided there are non-status passengers on board.

Nykaza says he and the other passenger were told they were the last to check in, so they were out.

“I don’t think so, there was probably a total of 300 pounds taken off the plane between me and the other gentleman who was a little smaller than me,” Nykaza said.

The I-Team contacted American Airlines. Its spokesperson refused an on-camera interview but said the airline issued an apology.

The spokesperson says under a federal passenger rights law, Nykaza should have been offered more than a $200 voucher when he was forced to de-plane. Then they compensated him in this letter – giving him a $500 voucher and 15,000 miles. American Airlines also says that its regional carrier, “Envoy,” did not follow proper policy on the flight and should have removed the people who booked last.

Instead, Envoy flight attendants were following its parent company’s policy by removing the last “checked- in” passengers, like Nykaza.

I’m not surprised about this. These regional operators that fly for the big carriers bearing their name try to cut corners on all ends and certainly in the way of customer service and due compensation.

To people without status I always recommend to do online check-in to be among the first to be checked in so when it comes to the sequence number they are in the upper field.

For the passenger I recommend to file a DOT complaint against the carrier as well even though it has been handled by AA Customer Relations already.