You never know what freebies Airbnb bookers might get with their rentals… like a decomposing corpse in the garden! 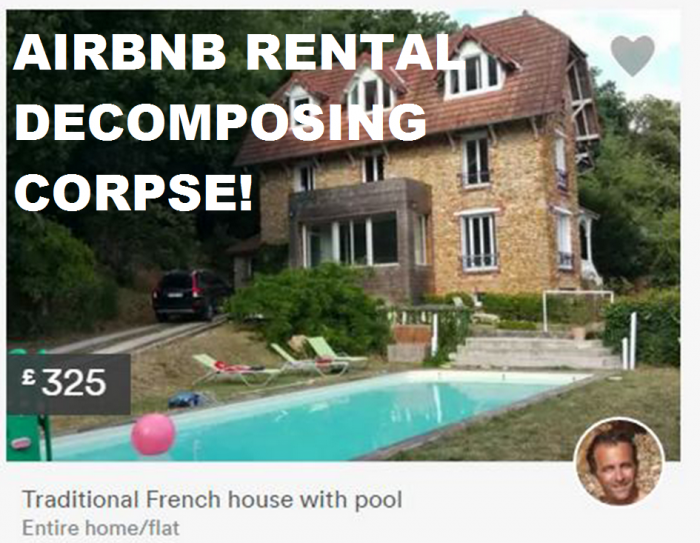 A couple had booked a $400+ per night Airbnb rental for the weekend to celebrate a 25th birthday only to find a corpse in the garden.

You can access Telegraphs piece about this incident here of which below is an excerpt:

A group of friends who rented a house via Airbnb in the Paris suburbs to hold a weekend party had their plans brought to a macabre end when they found the decomposing body of a woman in the garden.

The friends found the corpse on Saturday afternoon at the bottom of a steep bank at the end of the garden in the three-storey premises in the southern suburb of Palaiseau, 10 miles south of Paris.

The body was curled up, face down, in a shallow grave and had been covered with branches and logs, police said, adding that the victim was dressed but had no shoes on.

Police said they were treating the woman’s death as murder.

She had no identity papers on her and on Sunday, officers were still trying to find out who she was.

I wonder if the Airbnb host will charge a cleaning fee for the guests as they usually do or if this was part of the “experience”?

Well, let’s face it. Airbnb has very little control over hosts or guests. The vast majority of the rentals and renters are good, but there appears to be a few bad apples now and then that book them for activities that would get them thrown out of a hotel.

Air BnB Is Now A Delta Skymiles Partner, Earn 3 Miles Per $ Spent And Up To 25,000 Miles For New Hosts As Introductory...