Starwood Preferred Guest (SPG) has launched Get In The Game sweepstakes with Major League Baseball. 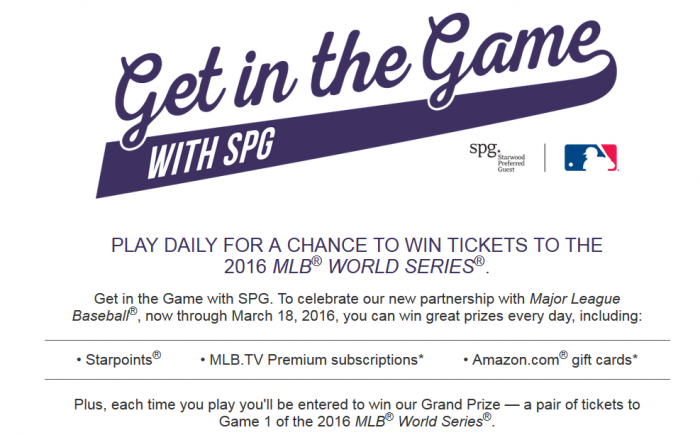 SPG members can win Starpoints, Amazon gift cards, and pair of tickets to MLB World Series. You can try your luck daily.

Note that these sweepstakes are available for SPG members in the following countries:

Here are the prizes:

MLB (Major League Baseball) is probably trying to get their game in front of younger and different audience that they tend to attract.

I didn’t win anything (as is the usual case with these sweepstakes) but maybe you have better luck.

1. ELIGIBILITY: Get in the Game with SPG® (the “Game”) is open only to legal residents of the United States (including the District of Columbia), Canada (excluding Quebec), Argentina, Australia, Austria, Belgium, China, Czech Republic, Egypt, France, Germany, Hong Kong, India, Indonesia, Ireland, Japan, Malaysia, Mexico, New Zealand, the Philippines, Portugal, Russia, Saudi Arabia, Singapore, South Africa, South Korea, Switzerland, Taiwan, Thailand, Turkey, the United Arab Emirates, United Kingdom and Vietnam who are eighteen (18) years of age or older and have reached the age of majority in their respective jurisdictions at the time of entry and are a member of the Starwood Preferred Guest® program (“SPG”) and at all subsequent times throughout the Game Period. Employees, officers, and directors (including immediate family members [spouse, parent, child, sibling and their respective spouses, regardless of where they reside] and members of the same household, whether or not related) of Starwood, Administrator, the MLB Entities and each of their respective parent companies, affiliated companies, subsidiaries, suppliers, distributors and advertising, promotional and judging agencies and all other companies associated with the Game, are not eligible to participate or win. The “MLB Entities” shall mean the Office of the Commissioner of Baseball (“BOC”), its Bureaus, Committees, Subcommittees and Councils, MLB Advanced Media, L.P. (“MLBAM” or “MLB.com”), Major League Baseball Properties, Inc., The MLB Network, LLC, the Major League Baseball Clubs (“Clubs”), each of their parent, subsidiary, affiliated and related entities, any entity which, now or in the future, controls, is controlled by, or is under common control with the Clubs or the BOC and the owners, general and limited partners, shareholders, directors, officers, employees and agents of the foregoing entities. Void in the Province of Quebec and where prohibited by law. All federal, state, local, provincial and municipal laws and regulations apply.

3. AGREEMENT TO OFFICIAL RULES: Participation in the Game constitutes entrant’s full and unconditional agreement to and acceptance of these Official Rules and the decisions of the Sponsor, which are final and binding. Winning a Prize is contingent upon fulfilling all requirements set forth herein.

5. HOW TO PLAY THE INSTANT WIN PORTION OF THE GAME:

Sponsor and the MLB Entities are not responsible for late, lost, incomplete or misdirected entries; interrupted or unavailable network servers; or other connection miscommunications, failed phone or computer or telephone transmissions, or technical failure, jumbled, scrambled or misdirected transmissions or other error of any kind whether human, mechanical or electronic that may affect the Game entry process. All entries become the exclusive property of the Sponsor, and none will be acknowledged or returned. Use of any automated system or agency relationship to submit entries is prohibited and will result in disqualification. The Game will be conducted, on Sponsor’s behalf by the Administrator, an independent judging organization, whose decisions as to the administration of the Game and the selection of the potential winners are final.

7. PRIZE CLAIM AND VERIFICATION: Potential winner may, at Sponsor’s discretion, be required to complete, sign, have notarized, and return an Affidavit of Eligibility, a Liability Release, and where lawful a Publicity Release within three (3) days of notification. If the documents are not returned in a timely manner, or if potential winner is found not to have complied with these Official Rules, failed to provide accurate entry submission information, is ineligible for any reason, or declines the Prize for any reason, the Prize may be forfeited. Potential winner may be required to provide proof of identification and submit to a background check, as determined by Sponsor in its sole discretion, in order to receive Prize. If a potential Grand Prize winner is a Canadian resident, potential winner must successfully answer a mathematical skill-testing question. Failure to successfully answer the question as stated will cause the Grand Prize to be forfeited. In the event the Sponsor, in its sole discretion, determines that any entry does not otherwise comply with the Official Rules or any other applicable regulatory guidelines, Sponsor reserves the right to disqualify the potential winner responsible for such entry.

*Approximate Retail Value
**Prize only available to winners who reside in the fifty United States.

Unclaimed Prizes will not be awarded. No exchanges or substitutions allowed. The Prizes are not transferable or refundable and must be accepted as awarded. No cash or other substitution may be made, except by the Sponsor, who reserves the right to substitute the Prize with another prize of equal or greater value if the Prize (or any portion thereof) is not available for any reason as determined by the Sponsor at their sole discretion. All expenses not specified are the sole responsibility of Prize winner. The winner is responsible for any taxes and fees associated with receipt or use of the Prize.

9. PUBLICITY: Except where prohibited, by participating in the Game and regardless of whether you are a winner, you grant the Sponsor and its subsidiaries, affiliates, and licensees and the MLB Entities an exclusive, irrevocable license to use, alter, adapt, publish, distribute, copy, exhibit, display, market, promote, advertise, publicize and otherwise exploit your name, signature, likeness, photograph(s), as well as additional photographs, video footage or other images that the Sponsor may take of you or your designated guest, if you are a winner (in their sole discretion), in whole or in part, in any manner and for whatever purpose Sponsor shall elect, in any and all languages, and in any and all media now known or hereinafter developed, including but not limited to, website, television, radio and/or printed materials, worldwide in perpetuity, without further compensation, notification or permission. You or your designated guest shall not claim or be entitled to receive any compensation or credit for such use.

10. PRIVACY AND PERSONAL INFORMATION: By participating in this Game, and by providing this information, you authorize Starwood to collect, process and use such information for lawful, Starwood business-related purposes; to store your information at and transmit it to various locations throughout the world, either directly or through third-party vendors, whether within your country of residence, the United States, or elsewhere. To learn more about our data collection and usage practices, please see our Privacy Statement at starwoodhotels.com.

11. GENERAL CONDITIONS: In the event that the operation, security, or administration of the Game is impaired in any way for any reason, including but not limited to typographical errors, fraud, virus, or other technical problem, or any condition caused by events beyond the reasonable control of the Sponsor that may cause the Game to be disrupted or corrupted, the Sponsor may, in its sole discretion, either (a) suspend the Game to address the impairment and then resume the Game in a manner that best conforms to the spirit of these Official Rules; or (b) award the Grand Prize at random from among the eligible entries received up to the time of the impairment. The Sponsor reserves the right in its sole discretion to disqualify any individual it finds to be tampering with the entry process or the operation of the Game, or to be acting in violation of these Official Rules or in an unsportsmanlike or disruptive manner. Any attempt by any person to undermine the legitimate operation of the Game may be a violation of criminal and civil law, and, should such an attempt be made, the Sponsor reserves the right to seek damages from any such person to the fullest extent permitted by law. Released Parties (i) make no warranty, guaranty or representation of any kind concerning any Prize (or any portion thereof), and (ii) disclaim any implied warranty. The Sponsor’s failure to enforce any term of these Official Rules shall not constitute a waiver of that provision.

12. RELEASE AND LIMITATIONS OF LIABILITY: By participating in the Game, entrants and their designated guests agree to release and hold harmless the Sponsor, Administrator, the MLB Entities, and each of their respective parents, affiliated companies, subsidiaries, licensees, distributors, dealers, retailers, printers, advertising and promotion agencies, and any and all other companies associated with the Game (the “Released Parties”) from and against any claim or cause of action arising out of participation in the Game, or receipt or use of any Prize, including, but not limited to (a) unauthorized human intervention in the Game; (b) technical errors related to computers, servers, providers, or telephone or network lines; (c) printing errors; (d) lost, late, postage-due, misdirected, or undeliverable mail; (e) errors in the administration of the Game or the processing of entries; or (f) injury or damage to persons or property which may be caused, directly or indirectly, in whole or in part, from entrant’s participation in the Game or acceptance, receipt, use or misuse of any Prize. Entrant further agrees that in any cause of action, the Released Parties’ liability will be limited to the cost of entering and participating in the Game, and in no event shall the Released Parties be liable for attorney’s fees. Entrant waives the right to claim any damages whatsoever, including, but not limited to, punitive, incidental, consequential, direct, or indirect damages. Sponsor is not responsible if any Prize cannot be awarded due to travel cancellations, delays or interruptions due to acts of God, acts of war, natural disasters, weather or acts of terrorism.

13. DISPUTES: Except where prohibited, entrant agrees that any and all disputes, claims, and causes of action arising out of, or connected with, the Game or any Prize awarded shall be resolved individually, without resort to any form of class action, and exclusively by the appropriate court located in the State of New York. All issues and questions concerning the construction, validity, interpretation and enforceability of these Official Rules, entrant’s rights and obligations, or the rights and obligations of the Released Parties in connection with the Game, shall be governed by, and construed in accordance with, the laws of the State of New York, without giving effect to any choice of law or conflict of law rules (whether of the State of New York or any other jurisdiction), which would cause the application of the laws of any jurisdiction other than the State of New York.

The Game is in no way sponsored, administered, produced or executed by any MLB Entity.