American Airlines made big announcements about their new Business Class product so I decided to take a detour through Shanghai to finally test it.

The ticket was booked as multi city itinerary starting in Shanghai and returning to Hong Kong with the use of AA systemwide eVIP upgrades that were gifted to me by a friend.

This proved to be the first thing that went wrong on this journey. Somehow American Airlines managed to completely lose the record of my friends AAdvantage information and even though the upgrade was confirmed in the system for over a week they asked me for the physical membership card of my friend and other information. At that time it was 3am in the U.S. and under no circumstances would I call someone at this hour just because the airline screwed up the upgrade process.

I told the ticket counter to call AA reservations to get it sorted. They didn’t know the phone number!! After providing it to them, the reservations agent messed around with the ticket again until it was finally sorted. The whole check-in process took over an hour. Not how you expect your trip to start.

I’ve been Executive Platinum myself for 5 years and Americans system is rather antique, yet I was never required to provide my actual membership card to friends when i upgraded them. Nonsense!

After the whole ordeal there was about 10 minutes time left (thankfully I arrived early at the airport) and I went to have a look at the Cathay Pacific Business Class lounge for which AA issued an invitation. The lounge was nothing noteworthy, simply a standard open air CX lounge with cold sandwiches, coffee and soda pops. I took a can of Fanta Orange but didn’t get very far with it as there was another baggage screening upon boarding and taking the can on board wasn’t allowed. What the heck!?

Once on board I was positively surprised by the cabin ambiance.

The single seat 3L looked spacious and was very comfortable to sit in. 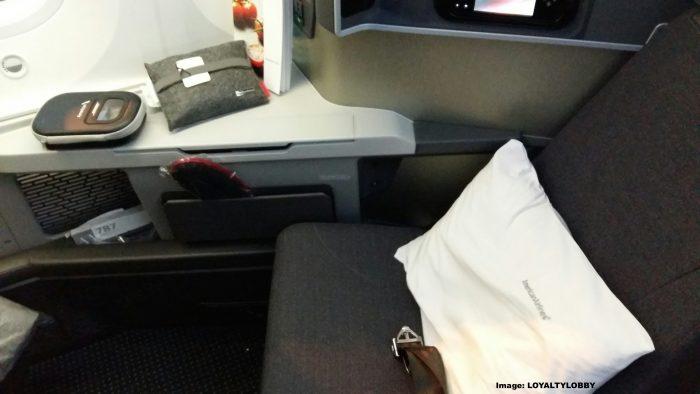 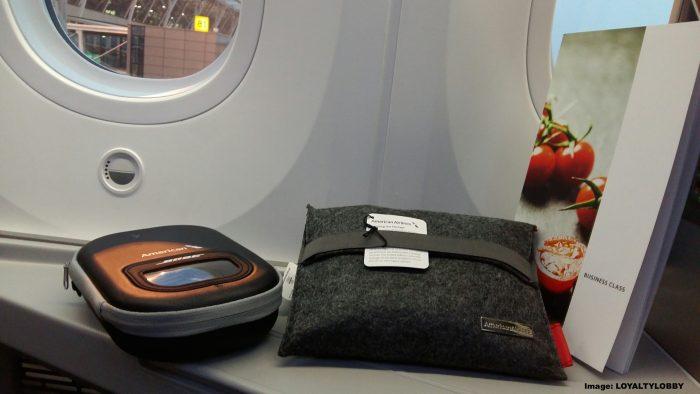 The service was decent on my side of the aisle as I had a friendly Chinese Flight Attendant working my side which proved to be quite positive as far as the service quality was concerned, at least compared to my previous experiences on AA flights to Europe with a rather senior American crew.

Upon having a look at the menu I was surprised again as the food and beverage options were extensive including real champagne. Since I wasn’t drinking that week I passed and went for sparkling water during the entire flight.

As main dish I chose Beef Filet which was delivered well prepared and tasted very good.

I find that the presentation of the meals plays a large part of making the passenger feel comfortable and appreciated. There is nothing I hate more than sitting in Business Class and being served a dish that looks like I just visited a canteen where someone behind the counter whipped the food on the plate with a large spoon.

In this case I’m very satisfied how American Airlines has lifted the standard to new dimensions.

As dessert I chose the signature Ice Cream with Butterscotch, Whipped Cream and Nuts. I severely hope my trainer isn’t reading this post.

The seat was comfortable to lay on in bed mode. Unfortunately after flying on the A380 that often during long haul flights I found the Dreamliner so noisy, not to say loud that I simply couldn’t sleep during the flight. This might have been my personal issue but usually I sleep really well on planes so I was surprised about the lack of rest I got during the flight. The fact that the crew was pretty noisy didn’t help either.

Due to favorable tail winds of at time 160 mph the flight arrived at LAX 1:30h prior to schedule. We docked at Tom Bradley International Terminal and were met with an empty arrivals hall which is always great as it makes the difference between heaven and hell. Immigration formalities were completed within 3 Minutes and right after reaching the baggage belt the priority baggage popped out. Efficient!

The onboard experience was very good and American Airlines managed to put a solid product together which (in my opinion) was overdue since the older generation Business Class seats are already a decade old and still installed in most of American’s long haul fleet. They have to go as soon as possible!

Salt in the soup was of course the check-in experience which goes back to incompetence of whoever handled that upgrade request at the Executive Platinum Desk.

If you have a chance of trying Americans new Business Class product on either a longhaul or Transcon flight I recommend you try it!