It is almost three years since I was last time presented a confirmation that showed the price that Expedia had paid for the hotel. You can access my previous piece here. 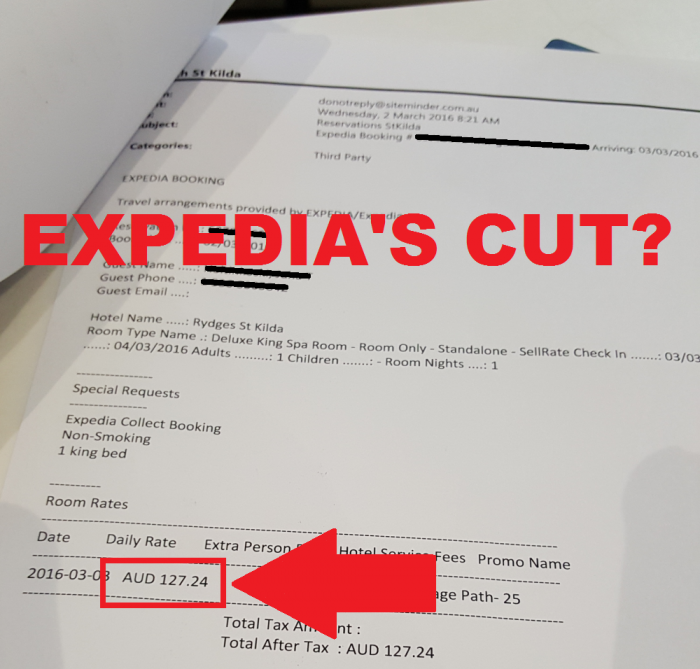 Last week when I was in Melbourne, I decided to go to St Kilda for couple of nights. Had one night stay at the Novotel (booked through Expedia because $50 cheaper than directly with Accor + $50 BPG coupon) and second night at the local Australian hotel called Rydges, which is part of VIP+ hotels and eligible for the bonus points promo (read more here).

So, the confirmation that I was asked to sign had an email attachment from Expedia that showed that the hotel was getting reimbursed 127.24 AUD for the night.

The price that I paid to Expedia before the $50 BPG coupon was $112.44 in USD. The Expedia’s margin basically would have been 15% had I not applied the coupon.

Seems that I have already consumed 9 hotel nights that were booked with Expedia this year. I tend to book them whenever the price is right and I can throw in a Best Price Guarantee coupon and/or claiming another one.

Not really a surprise that the margin this case was 15%. The hotel in Indonesia was paying Expedia 25% that I believe is bit on the high side. Chain hotels tend to pay 10% travel agent commission and higher for these OTAs such as Expedia and Booking.com.

Isn’t somewhat surprising that this hotel belonging to an Australian hotel chain gets its Expedia confirmations by email? You would think that there are more streamlined options available for transferring the confirmed reservations from Expedia.

Marriott Bonvoy previously introduced Annual Choice Benefit-options for members that reach 50 and 75 nights per calendar year and I want to have a...