After coming across this topic in the Conde Nast Traveler and having flown a few segments in Economy as well this month I want to bring up the matter of reclining seats in coach class. Do you? Should You? 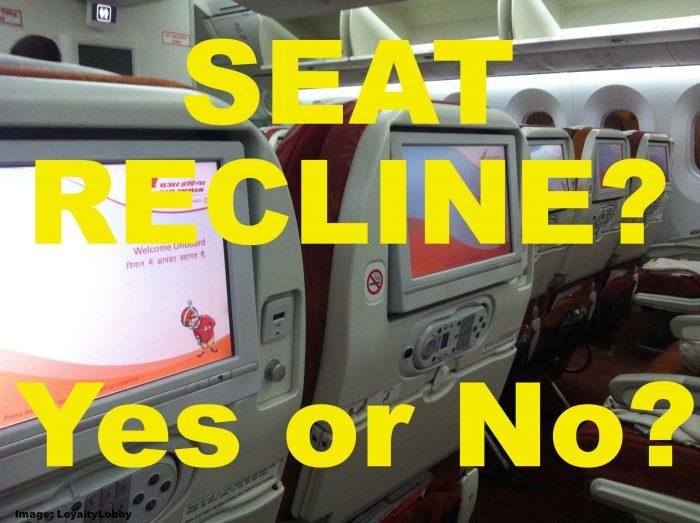 Reclining your seat appears to be a larger point for discussion and consideration than I imagined as my take always was if something reclines then it’s because it should be used that way.

Apparently there are people out there who transform the whole matter of seat recline into a question of manners and character.

As mentioned I read an article related to this topic at the Conde Nast Traveler (access here) and was stunned. Two of their editors penned down their take on the topic.

In this new, slightly less civilized era of domestic flight, what don’t we fight over when we board a plane? There’s the battle for the overhead bin, blurred lines around allergies and passenger removal, and some people absolutely losing it over legroom. Nothing is perhaps as divisive, however, as the issue of whether or not to recline your seat.

As I mentioned above my opinion is that the seat was designed to recline for a good reason and that is to use it. There is absolutely no question about not reclining my seat, if someone wants extra space he or she should buy a Business Class ticket.

Remember the ‘Knee Defender’, a piece of plastic available for purchase that when attached to the seat in front of you prevents it from reclining? LoyaltyLobby wrote back in 2014 about a fight that ensued after one was used and the flight was subsequently diverted (access here).

What’s the opinion of the Conde Nast editors? Here is take one!

Flying can sometimes be a pain, the little slogan seemed to acknowledge, but if we all treat each other decently, everything will end up okay. Viewed in that context, reclining your airline seat is nothing short of sociopathic. It’s not hyperbole! When you lean back, luxuriating in those precious few inches you’ve robbed from the passenger in the next row, you’re damaging the ad hoc society we form every time the boarding door is closed.

Sure, you paid for the seat, and on most airlines that comes with the right to recline. But, as parents everywhere say, just because you can doesn’t mean you should. Call it the George Costanza principle: Even on an airplane, ‘we’re living in a society!’ Those few extra inches might make your flight a tiny bit more comfortable—but your leaning back will make mine a whole lot worse.

Wow. I mean WOW. I wouldn’t interpret the survival of civilization into reclining behavior but this guy obviously has deep feelings about the matter. I respect that even though I find it a bit coo coo.

What does his colleague have to say?

“I don’t consider myself a selfish person, or one who acts with a blatant disregard for others’ privacy, space, or comfort. Yet when I’m on an airplane, sizing my nearly-six-foot-tall frame into some 30 inches of pitch, I will take what little extra space I can—space that, included in the price and feature of the seat, is rightfully mine. Chalk it up to sunk cost. Despite what some of my co-workers say, however, I’m not a monster: I won’t recline when someone is eating, and will move my seat if someone asks me to.

And while the idea that refusing my right to recline certainly benefits the person behind me, it doesn’t really matter unless everyone on the plane abides by the rule, right? Otherwise, when one person reclines, so does another, setting off a domino-like chain of cramped passengers trying to get as much space as they can.

I can definitely follow this ladies arguments and pretty much agree with her. There is a certain limit of consideration which is fine such in the example when meals are being served but at one point we should get comfortable and just use the seat how it was designed to.

Travelers always have different circumstances of their journey. Do you expect someone who just flew from Hong Kong to Los Angeles to not recline his seat on the 6 hour continuation to Boston just because that’s your personal etiquette? That’s just silly, the person just spent 14 hours on the plane for heavens sake. He should be allowed to get comfortable to whatever extent the seating allows.

Talking about Hong Kong, I flew Cathay Pacific and their seat was sliding back and forth while sitting in sort of a shell and not taking legroom away from the person behind. Essentially you only cut down your own space. That sounds pretty fair doesn’t it?

This seems to be an emotional topic where different worlds of attitudes collide with each other. What’s your opinion about it? Do you recline your seat in Economy Class?